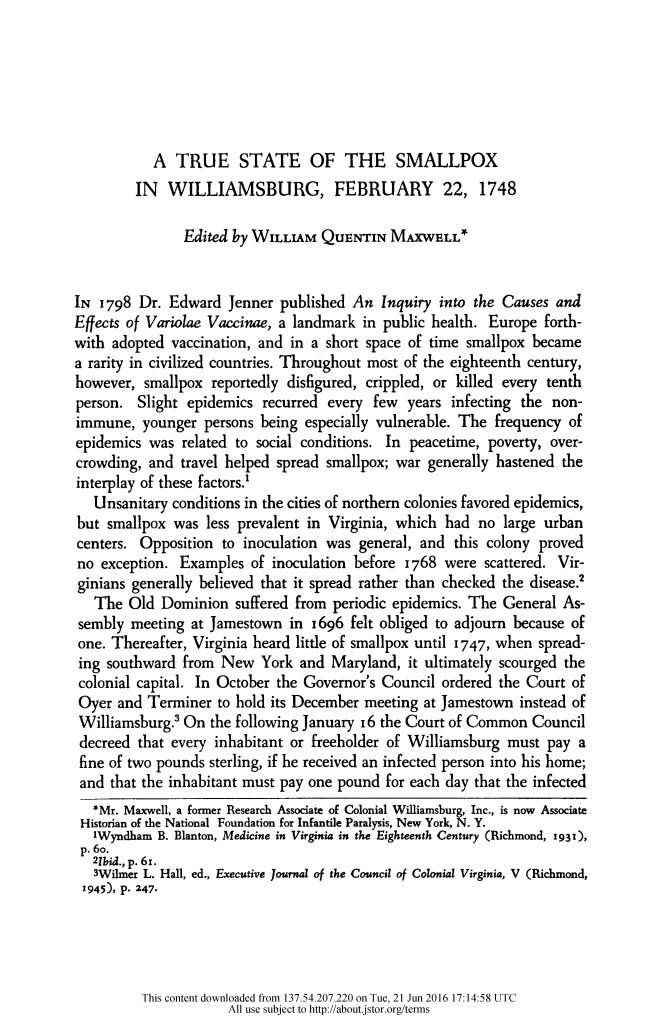 The Virginia Magazine of History and Biography, Volume 63, Number 3, Page 269

In 1798 Dr. Edward Jenner published An Inquiry into the Causes and Effects of Variolae Vaccinae, a landmark in public health. Europe forthwith adopted vaccination, and in a short space of time smallpox became a rarity in civilized countries. Throughout most of the eighteenth century, however, smallpox reportedly disfigured, crippled, or killed every tenth person. Slight epidemics recurred every few years infecting the non-immune, younger persons being especially vulnerable. The frequency of epidemics was related to social conditions. In peacetime, poverty, over-crowding, and travel helped spread smallpox; war generally hastened the interplay of these factors.

Unsanitary conditions in the cities of northern colonies favored epidemics, but smallpox was less prevalent in Virginia, which had no large urban centers. Opposition to inoculation was general, and this colony proved no exception. Examples of inoculation before 1768 were scattered. Virginians generally believed that it spread rather than checked the disease.

The Old Dominion suffered from periodic epidemics. The General Assembly meeting at Jamestown in 1696 felt obliged to adjourn because of one. Thereafter, Virginia heard little of smallpox until 1747, when spreading southward from New York and Maryland, it ultimately scourged the colonial capitol. In October the Governor’s Council ordered the Court of Oyer and Terminer to hold its December meeting at Jamestown instead of Williamsburg. On the following January 16 the Court of Common Council decreed that every inhabitant or freeholder of Williamsburg must pay a fine of two pounds sterling, if he received an infected person into his home; and that the inhabitant must pay one pound per day that the infected 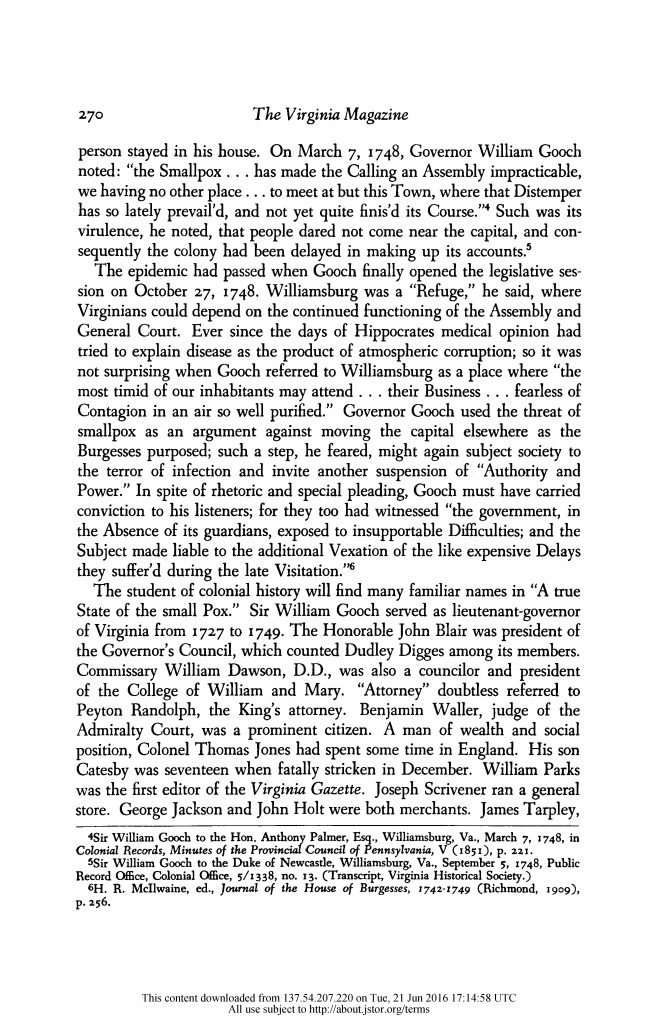 person stayed in his house. On March 7, 1748, Governor William Gooch noted: “the Smallpox…has made the Calling an Assembly impracticable, we having no other place…to meet at but this Town, where that Distemper has so lately prevail’d, and not yet quite finish’d its Course.” Such was its virulence, he noted, that people dared not come near the capitol, and consequently the colony had been delayed in making up its accounts.

The epidemic had passed when Gooch finally opened the legislative session on October 27, 1748. Williamsburg was a “Refuge,” he said, where Virginians could depend on the continued functioning of the Assembly and General Court. Ever since the days of Hippocrates medical opinion had tried to explain disease as the product of atmospheric corruption; so it was not surprising when Gooch referred to Williamsburg as a place where “the most timid of our inhabitants may attend…their Business…fearless of Contagion in an air so well purified.” Governor Gooch used the threat of smallpox as an argument against moving the capitol elsewhere as the Burgesses proposed; such a step, he feared, might again subject society to the terror of infection and invite another suspension of “Authority and Power.” In spite of rhetoric and special pleading, Gooch must have carried conviction to his listeners; for they too had witnessed “the government, in the Absence of its guardians, exposed to insupportable Difficulties; and the Subject made liable to the additional Vexation of the like expensive Delays they suffer’d during the late Visitation.”

The student of colonial history will find many familiar names in “A true State of the small Pox.” Sir William Gooch served as lieutenant-governor of Virginia from 1727 to 1749. The Honorable John Blair was president of the Governor’s Council, which counted Dudley Digges among its members. Commissary William Dawson, D.D., was also a councilor and president of the College of William and Mary. “Attorney” doubtless referred to Peyton Randolph, the King’s attorney. Benjamin Waller, judge of the Admiralty Court, was a prominent citizen. A man of wealth and social position, Colonel Thomas Jones had spent some time in England. His son Catesby was seventeen when fatally stricken in December. William Parks was the first editor of the Virginia Gazette. Joseph Scrivener ran a general store. George Jackson and John Holt were both merchants. James Tarpley, 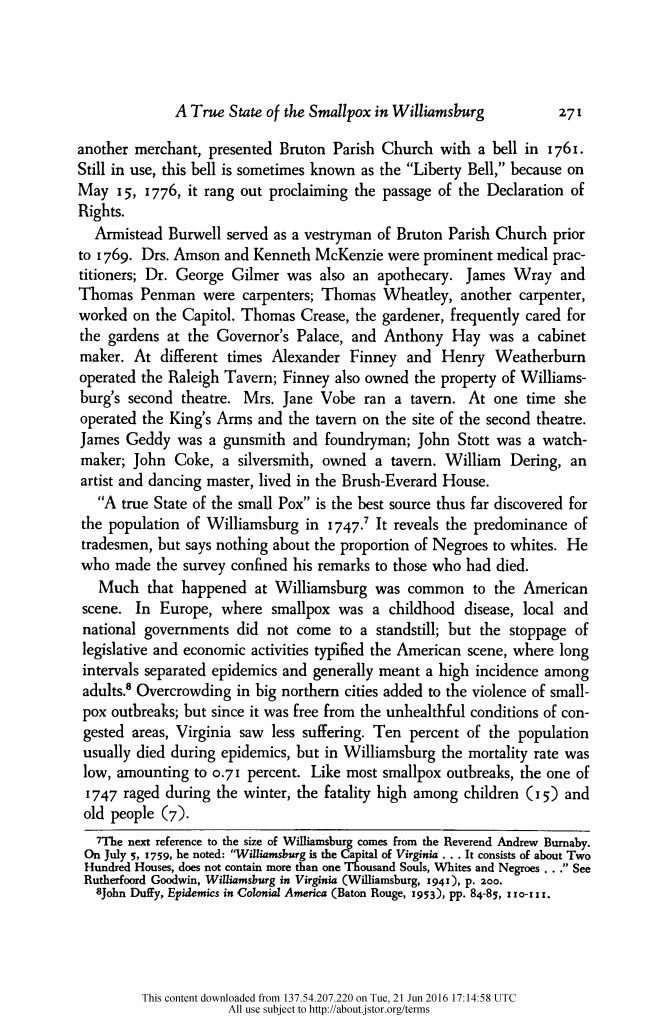 another merchant, presented Bruton Parish Church with a bell in 1761. Still in use, this bell is sometimes known as the “Liberty Bell,” because on May 15, 1776, it rang out proclaiming the passage of the Declaration of Rights.

Armistead Burwell served as a vestryman of Bruton Parish Church prior to 1769. Drs. Amson and Kenneth McKenzie were prominent medical practitioners; Dr. George Gilmer was also an apothecary. James Wray and Thomas Penman were carpenters; Thomas Wheatley, another carpenter, worked on the Capitol. Thomas Crease, the gardener, frequently cared for the gardens at the Governor’s Palace, and Anthony Hay was a cabinet maker. At different times Alexander Finney and Henry Weatherburn operated the Raleigh Tavern; Finney also owned the property of Williamsburg’s second theatre. Mrs. Jane Vobe ran a tavern. At one time she operated the King’s Arms and the tavern on the site of the second theatre. James Geddy was a gunsmith and foundryman; John Stott was a watchmaker; John Coke, a silversmith, owned a tavern. William Dering, an artist and dancing master, lived in the Brush-Everard House.

“A true State of the small Pox” is the best source thus far discovered for the population of Williamsburg in 1747. It reveals the predominance of tradesmen, but says nothing about the proportion of Negroes to whites. He who made the survey confined his remarks to those who had died.

Much that happened at Williamsburg was common to the American scene. In Europe, where smallpox was a childhood disease, local and national governments did not come to a standstill; but the stoppage of legislative and economic activities typified the American scene, where long intervals separated epidemics and generally meant a high incidence among adults. Overcrowding in big northern cities added to the violence of smallpox outbreaks; but since it was free from the unhealthful conditions of congested areas, Virginia saw less suffering. Ten percent of the population generally died during epidemics, but in Williamsburg the mortality rate was low, amounting to 0.71 percent. Like most smallpox outbreaks, the one of 1747 raged during the winter, the fatality high among children (15) and old people (7). 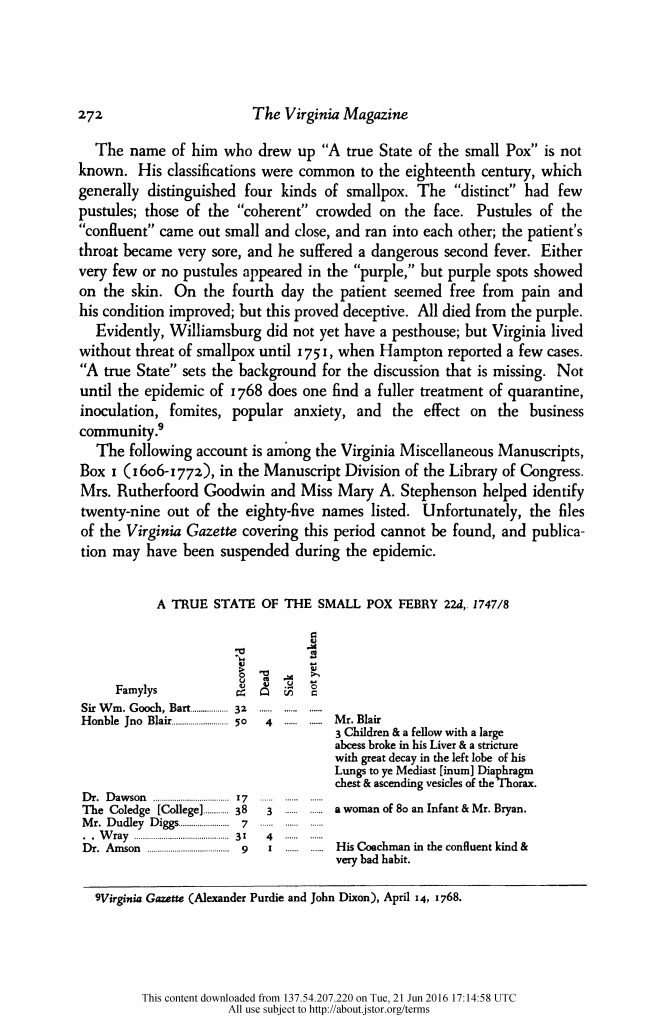 The name of him who drew up “A true State of the small Pox” is not known. His classifications were common to the eighteenth century, which generally distinguished four kinds of smallpox. The “distinct” had few pustules; those of the “coherent” crowded on the face. Pustules of the “confluent” came out small and close, and ran into each other; the patient’s throat became very sore, and he suffered a dangerous second fever. Either very few or no pustules appeared in the “purple,” but purple spots showed on the skin. On the fourth day the patient seemed free from pain and his condition improved; but this proved deceptive. All died from the purple.

Evidently, Williamsburg did not yet have a pesthouse; but Virginia lived without threat of smallpox until 1751, when Hampton reported a few cases. “A true State” sets the background for the discussion that is missing. Not until the epidemic of 1768 does one find a fuller treatment of quarantine, inoculation, fomites, popular anxiety, and the effect on the business community.

The following account is among the Virginia Miscellaneous Manuscripts, Box I (1606–1772), in the Manuscript Division of the Library of Congress. Mrs. Rutherford Goodwin and Miss Mary A. Stephenson helped identify twenty-nine out of the eighty-five names listed. Unfortunately, the files of the Virginia Gazette covering this period cannot be found, and publication may have been suspended during the epidemic. 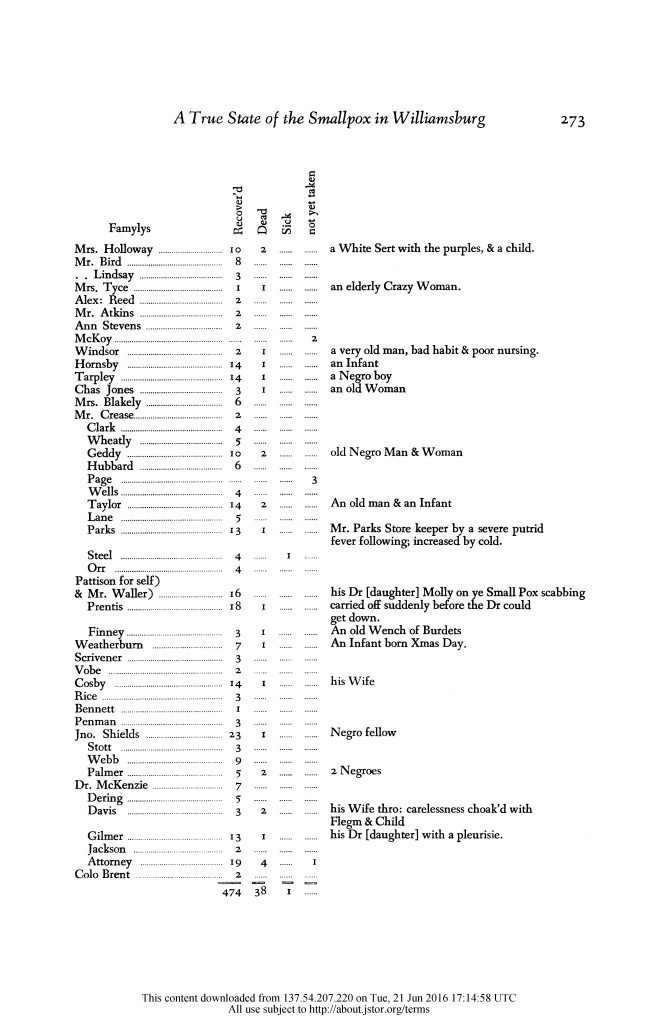 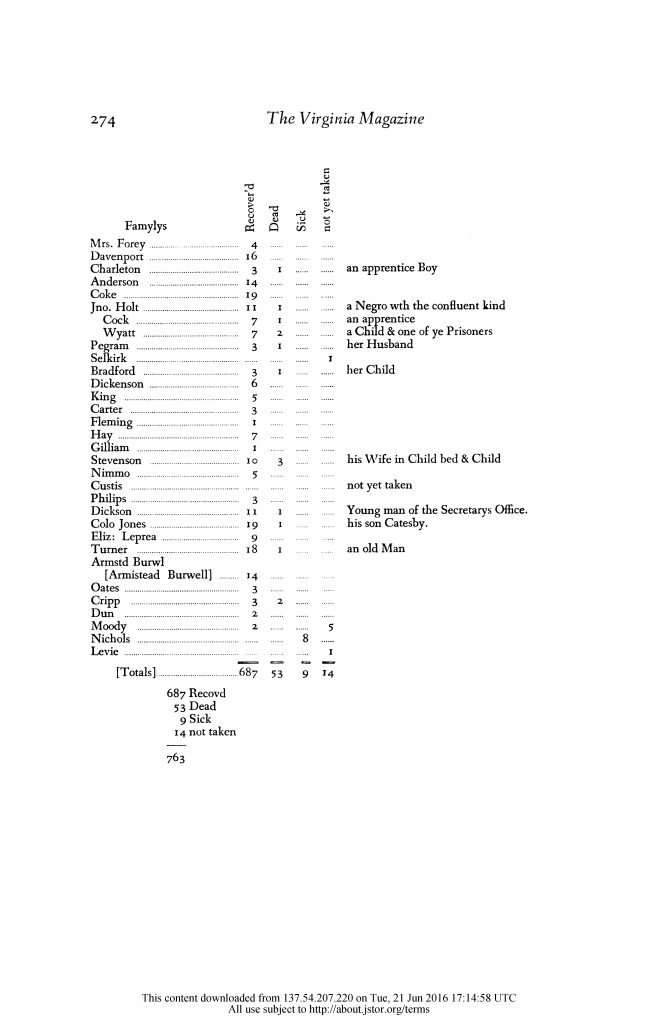