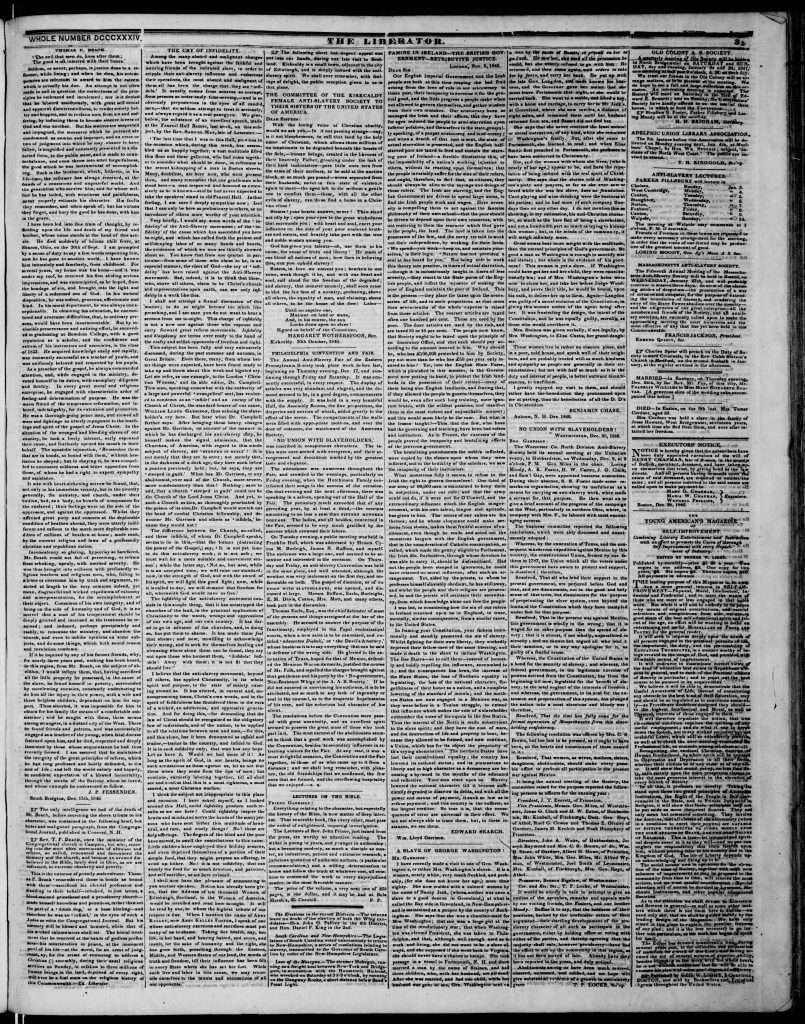 A SLAVE OF GEORGE WASHINGTON!

I have recently made a visit to one of Gen. Washington’s, or rather Mrs. Washington’s slaves. It is a woman, nearly white, very much freckled, and probably, (for she does not know her age,) more than eighty. She now resides with a colored woman by the name of Nancy Jack, (whose mother was once a slave to a good deacon in Greenland,) at what is called the Bay side in Greenland, in New-Hampshire, and is maintained as a pauper by the county of Rockingham. She says that she was a chamber-maid for Mrs. Washington; that she was a large girl at the time of the revolutionary war; that when Washington was elected President, she was taken to Philadelphia, and that, although well enough used as to work and living, she did not want to be a slave always, and she supposed if she went back to Virginia, she would never have a chance to escape. She took passage in a vessel to Portsmouth, N. H. and there married a man by the name of Staines, and had three children, who, with her husband, are all dead. After she was married, and had one child, while her husband was gone to sea, Gen. Washington sent on a man by the name of Bassett, to prevail on her to go back. He saw her, and used all the persuasion he could, but she utterly refused to go with hi. He returned, and then came again, with orders to take her by force, and carry her back. He put up with the late Gov. [John] Langdon, and made known his business, and the Governor gave her notice that she must leave Portsmouth that night, or she would be carried back. She went to a stable, and hired a boy, with a horse and carriage, to carry her to Mr. Jack’s, at Greenland, where she now resides, a distance of eight miles, and remained there until her husband returned from sea, and Basset did not find her.

She says that she never received the least mental or moral instruction, of any kind, while she remained in Washington’s family. But, after she came to Portsmouth, she learned to read; and when Elias Smith first preached in Portsmouth, she professes to have bene converted to Christianity.

She, and the woman with whom she lives, (who is nearly of her age,) appear to be, and have the reputation of being imbued with the real spirit of Christianity. She says that the stories told of Washington’s piety and prayers, so far as she ever saw or heard while she was his slave, have no foundation. Card-playing and wine-drinking were the business at his parties; and he had more of such company Sundays than on any other day. I do not mention this as showing, in my estimation, his anti-Christian character, so much as the bare fact of being a slaveholder, and not a hundredth part so much as trying to kidnap this woman; but, in the minds of the community, it will weigh infinitely more.

Great names bear more weight with the multitude, than the eternal principles of God’s government. So good a man as Washington is enough to sanctify war and slavery; but where is the evidence of his goodness? This woman is yet a slave. If Washington could have got her and her child, they were constitutionally his; and if Mrs. Washington’s heirs were now to claim her, and take her before Judge Woodbury, and prove their title, he would be bound, upon his oath, to deliver her up to them. Again—Langdon was guilty of a moral violation of the Constitution, in giving this woman notice of the agent being after her. It was frustrating the design, the intent of the Constitution, and he was equally guilty, morally, as those who would overthrow it.

Mrs. Staines was given verbally, if not legally, by Mrs. Washington, to Eliza Custis, her grand-daughter.

These women live in rather an obscure place, and in a poor, cold house, and speak well of their neighbors, and are probably treated with as much kindness and sympathy as people are generally in their circumstances; but not with half so much as it is the duty and interest of people, in better outward circumstances, to treat them.