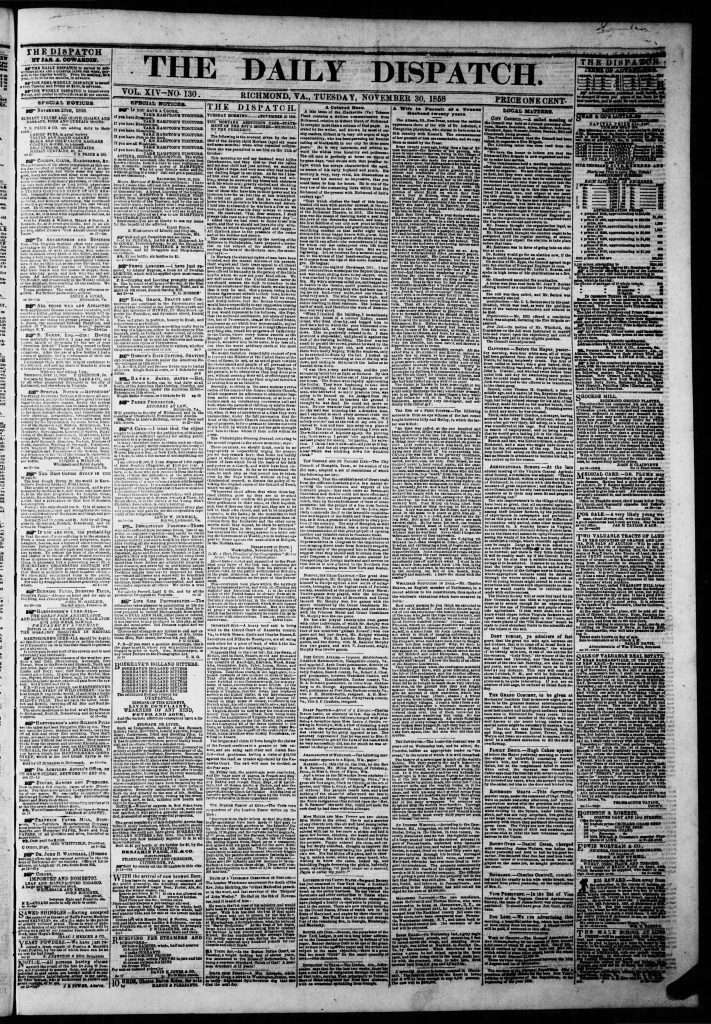 A late issue of the Clarskville (Va.) Tobacco Plant contains a written communication from Richmond, relative to Gilbert Hunt, of Richmond. It occupies more than a column of that paper. As stated by the writer, and known by most of our city readers, Gilbert is “a very old negro, of high respectability, who has been pursuing his humble calling of blacksmith in our city for three score years.” He is very courteous, and evinces toward the whites true humility and politeness. The old man is perfectly at home on topics of by-gone days, “and dwells with that peculiar delight which has always characterized the aged, on scenes of his early boyhood and youth. His memory is very, very vivid, his illustrations so happy and his manner so impressive, that you could listen to him for hours. He is one of the very few of the connecting links which bind the Richmond of the present with Richmond of a half century ago.”

“That which clothes the head of this hoary-headed old man with peculiar interest, is the noble part which he bore in the memorable burning of the Richmond Theatre, in 1811. His brawny arm was the means of rescuing many a soul from the jaws of the devouring element, and some of the first families of our city now point to Gilbert Hunt with mingled pride and gratitude for his self-sacrificing conduct on that awful night which shrouded so many happy hearts with gloom. Long may he live in the enjoyment of the most precious boon earth can afford—the remembrance of those for whom one has endangered even life itself. May his last days be his best days. But we are digressing. Let us be silent for a moment and listen to the scenes of that heart-rending occasion, as it comes from the lips of this noble hearted negro. He begins:

“It was on the night of Christmas, 1811. I had just returned from worship at the Baptist Church, and was about sitting down to my supper, when I was startled by the cry that the theatre was on fire. My wife’s mistress called me, and begged me to hasten to the theatre, and if possible, save her only daughter—a young lady who had been teaching me my book every night, and one whom I loved very much. The wind was quite high, and the hissing and crackling flames swoon swept the entire building in their embrace. The house was built of wood, and therefore the work of destruction was very short.

“When I reached the building, I immediately went to the house of a colored fiddler, named Gileat, who lived close by, and begged him to lend me a bed on which the poor frightened creatures might fall, as they leaped from the windows. This he positively refused to do. I then procured a step-ladder, and placed it against the wall of the burning building. The door was too small to permit the crowd, pushed forward by the scorching flames, to get out, and numbers of them were madly leaping from the windows, only to be crushed to death by the fall. I looked up and saw Dr. — standing at one of the top windows, and calling to me to catch the ladies as he handed them down.

“I was then young and strong, and the poor screaming ladies felt as light as feathers. By this means we got all the ladies out of this portion of the house. The flames were rapidly approaching the Doctor. They were beginning to take hold of his clothing, and O me! I thought that good man, who had saved so many precious lives, was going to be burned up. He jumped from the window, and when he touched the ground I thought he was dead. He could not move an inch. No one was near that portion of the house; for the wall was tottering like a drunken man, and I expected to see it every moment crush the Doctor to death. I heard him scream out, Will nobody save me? and at the risk of my own life I rushed to him and bore him away to a place of safety. The scene surpassed anything I ever saw. The wild shrieks of hopeless agony, the piercing cry, ‘Lord save or I perish’ ‘the uplifted hands, earnest prayer for mercy, for pardon, for salvation. I think I see it now—all—all just as it happened.” And the old negro stopped to wipe away a teach which was trickling down his wrinkled cheek.”