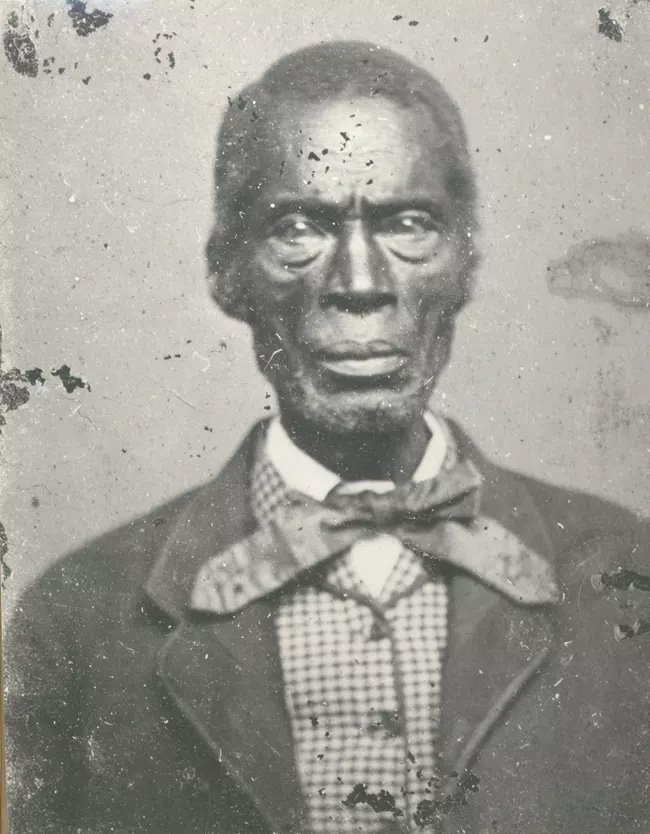 Leonard Norris, one of the first generation of people enslaved at Arlington House, poses for a photograph as an elderly, free man. George Washington Parke Custis—grandson of Martha Washington and stepgrandson as well as adopted son of U.S. president George Washington—brought the first enslaved people to the Arlington property he owned in 1802, after the death of his widowed grandmother. G. W. P. Custis inherited his grandmother's enslaved people, most of whom had been born at Mount Vernon and were part of the Custis estate from Martha Washington’s first marriage. In addition to those he inherited, Custis purchased other people enslaved by his mother. In total, Custis took possession of nearly 200 enslaved people and as many as 63 remained at Arlington House. (The others worked on two other plantations Custis owned—White House and Romancoke on the Pamunkey River near Richmond.) The enslaved at Custis's Arlington plantation built the Greek Revival mansion known as Arlington House, using local clay and shells from the Potomac for making bricks and stucco, and harvesting local timber for the interior floors and wooden supports. The enslaved laborers also constructed other outbuildings, maintained the household, and worked as field hands, raising and harvesting wheat and corn.

After the death of G.W P. Custis in 1857, the estate and the enslaved were inherited by his daughter Mary Custis Lee, the wife of Robert E. Lee, future general in the Confederate Army who led the rebellion against the United States. Wesley Norris, perhaps a relative of Leonard Norris, recalled how Lee ordered that he be whipped, along with two other enslaved people, after they unsuccessfully attempted to self-emancipate from the Arlington House estate.

Leonard Norris and his wife, Sally, also part of the first generation of the enslaved at Arlington, had a daughter, Salina Gray, who became the head housekeeper and personal servant to Mary Custis before her marriage to Robert E. Lee.