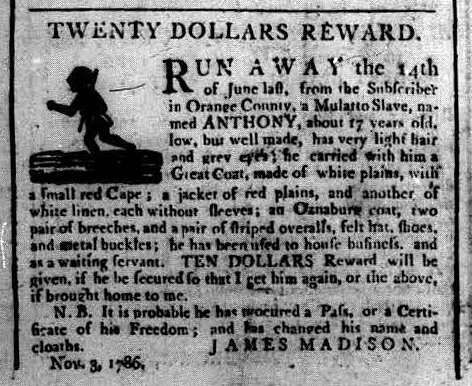 James Madison Seeking the Capture of an Enslaved Teenager

In this newspaper advertisement published in the November 22, 1786, edition of Richmond's Virginia Gazette , James Madison, the future president of the United States, promises a reward of twenty dollars to anyone who captures and secures an enslaved house servant named Anthony who had fled Montpelier—Madison's country plantation in Orange County—in search of freedom. Madison gives a detailed description of the escapee who was "about seventeen years old, low, but well made, has very light hair and grey eyes," as well as an account of the clothing he brought with him, which included a "Great Coat ... with a small red Cape" as well as another coat and several jackets, "two pairs of breeches, and a pair of striped overalls, felt hat, shoes, and metal buckles." Anthony had worked as a house servant at Montpelier, which probably accounts for the nature of the clothing listed. Madison warns, however, that Anthony has probably changed his clothes and his name, and "has secured a Pass or a Certificate of his Freedom." Madison was persistent in seeking the capture pf Anthony, as he wrote this advertisement on November 3, 1786, nearly five months after the teenager had fled Montpelier.

Anthony was captured in June 1787, a full year after his initial escape; but he subsequently fled to freedom again. Madison placed another advertisement—this one published in the September 6, 1787, edition of the Virginia Herald in Fredericksburg—that gave an account of Anthony's activities during his year-long self-emancipation. Anthony told another enslaver that he had traveled to the West Indies, Philadelphia, and Charleston during that time. He had also worked as a "tree man" in Norfolk and Portsmouth using the name Robert or Bob Jones.

Following his second escape, Anthony secured a pass in Fredericksburg that indicated he was a freedman. Thereafter, he traveled to various place in Virginia and then to Philadelphia. Since Anthony had successfully escaped bondage twice, Madison offered thirty dollars (the equivalent of nearly $900 in 2021 currency) to anyone who brought him back to Montpelier. Madison advised that it would be best if Anthony were put in irons—otherwise, he would probably escape again. Fearing that Anthony might take to the water to flee the area, Madison warned "all masters of vessels" that they were forbidden to carry an enslaved person out of state.