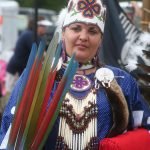 Deborra Moore, a member of the Nottoway Indian Tribe of Virginia, wears an elaborate beaded head covering and jewelry while celebrating a tribal powwow on September 18, 2010. 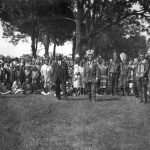 Members of the Chickahominy, Pamunkey, and Mattaponi tribes pose for an unknown photographer at an intertribal powwow at the Chickahominy reservation in New Kent County late in the 1920s. Among those present are Jane Miles and Reverend L. H. Suddith. In foreground, from left to right are Pamunkey chief George Major Cook, Chickahominy chief O. […] 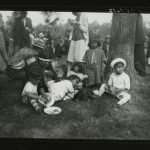 Chickahominy, Pamunkey, and Mattaponi Indian children play together at an intertribal powwow in an unknown location sometime late in the 1920s. The photographer is unknown. From left to right are Eldridge Adkins, Opechancanough Adkins, Savannah Adkins, Mohawk Adkins, Annawon Adkins, Alice Adkins, and Lucian Adkins. Description courtesy of the Virginia Indian Archive. 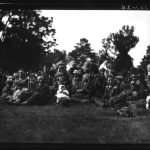 Members of the Chickahominy Indian tribe pose for an unknown photographer at an intertribal powwow at an unknown location sometime early in the 1920s. Among those photographed are Mary Holmes (first from left), Curtis J. Wynn (third from left), and Lee Holmes (fifth from left). Description courtesy of the Virginia Indian Archive. 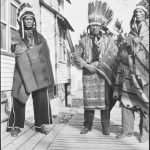 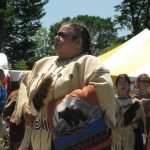 Chief Sharon Bryant of the Monacan Indian Nation is shown in this photograph by Bill Johns, taken on May 21, 2006, at the annual Monacan powwow in Elon. Description courtesy of the Virginia Indian Archive. 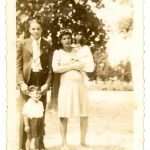 In 1607, when English colonists established the settlement at Jamestown, the Chickahominy Indians lived in towns and villages along the , from the fall line of the river to its mouth. They spoke a dialect of Algonquian and practiced a culture similar to the other Algonquian-speaking Indians of Tsenacomoco, a paramount chiefdom ruled in 1607 […] 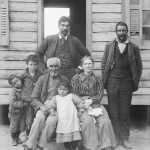 By 1607, when the first English settlers founded Jamestown, the Nansemond lived in several villages centered near Chuckatuck, in present-day Suffolk, along the . Their head chief lived near Dumpling Island, where the tribe’s temple and sacred objects were located. The Nansemond tribe spoke a dialect of Algonquian and was among the roughly twenty-eight to […] 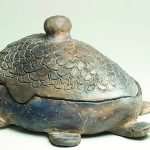 The Rappahannock probably first encountered the English in 1603, when an English captain, likely Samuel Mace, sailed up the Rappahannock River and was befriended by the Rappahannock . The captain killed the chief and took a group of Rappahannock men back to England. In December 1603, those men were documented giving dugout canoe demonstrations on […] 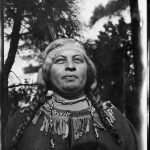 Susie P. Nelson, wife of Rappahannock chief Otho S. Nelson, wears a fringed cloth dress, beaded necklace, and feather and beaded headband in this outdoor portrait taken at a Nanticoke powwow in Delaware in 1927. The photographer Frederick "Fred" Johnson (1904–1994), of Massachusetts, was a student of the famed anthropologist Frank G. Speck at the […]