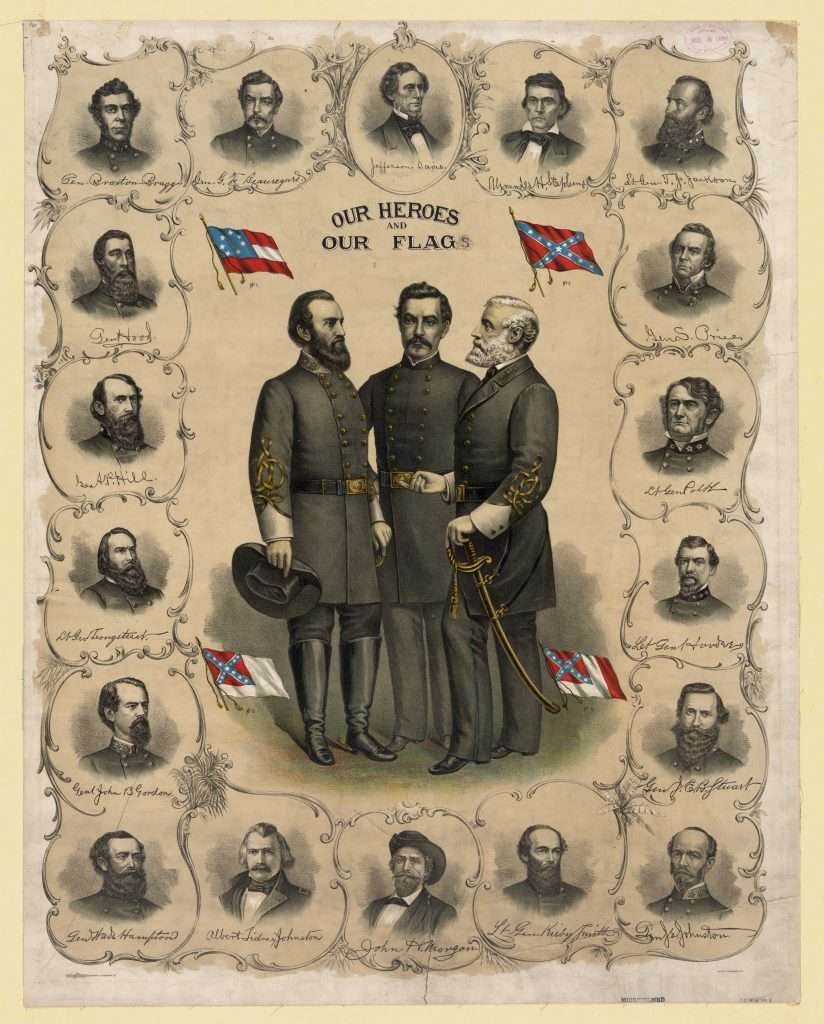 Our Heroes and Our Flag

This print, created July 6, 1896 by the Southern Lithograph Co., shows full-length portraits of Confederate generals Robert E. Lee, Thomas "Stonewall" Jackson, and P.G.T. Beauregard. The periphery of the image features four versions of the Confederate flag and bust portraits of leading figures of the Confederacy, including President Jefferson Davis and Vice-president Alexander Stephens at top, and sixteen generals. Titled Our Heroes and Our Flag (and later anonymously doctored to read Our Heroes and Our Flags), the color lithograph shows the chronological evolution of the Confederate flag. At the upper left is the First National Flag, officially used from March 1861 until May 1863, which came to be known as the Stars and Bars. The field of blue in the upper left corner of the flag contains a circle of white stars representing each Confederate state—at first seven (as shown here) then eleven, and finally thirteen (the last two a gesture to the secessionist factions of Missouri and Kentucky). Next, in the upper right, is a rectangular version of the so-called battle flag that was designed to be flown by military units only. In use from the autumn of 1861 until the collapse of the Confederacy, the battle flag was popularly adopted following the Civil War as a symbol of the Lost Cause movement as well as an emblem of Southern valor and honor. Continuing to the lower left, the Second National flag, the so-called "Stainless Banner" was employed from May 1863 until March 1865. Finally, the Third National Flag, shown at lower right, added a vertical red stripe to the Stainless Banner so that the flag would not be misconstrued as being a flag of truce. This final flag, which came to be called "The Blood Stained Banner," was only in use for a brief period—from March 4, 1865 until the fall of the Confederacy in June of that year.