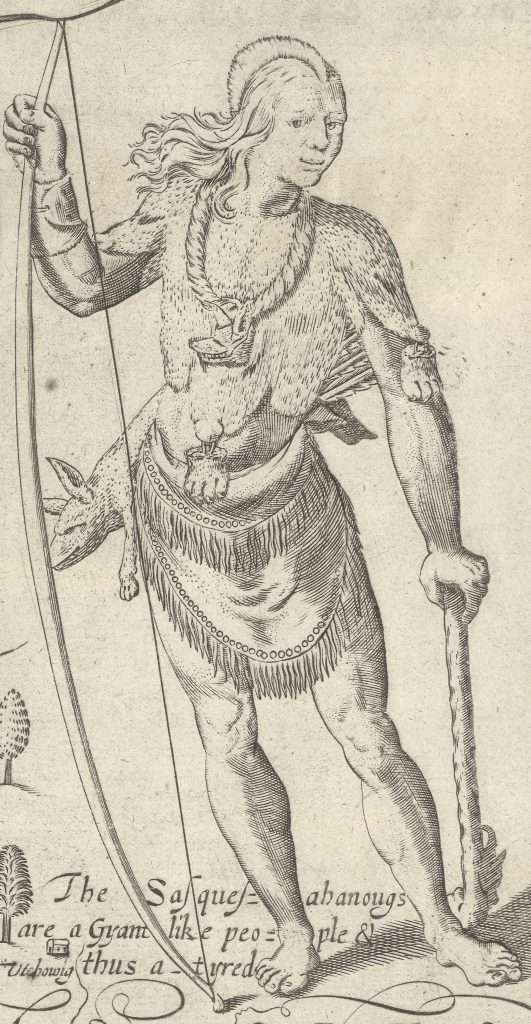 A muscular Susquehannock Indian, an animal pelt draped around his shoulders and chest, appears in this detail from Captain John Smith's map of the Chesapeake region. Smith encountered members of the tribe, who are described in the caption as being "Giant like people," while exploring the Chesapeake Bay near the mouth of the Susquehanna River in present-day Maryland in 1608. The Englishman wrote of their unusual attire and ornaments which included "the head of a Woolfe hanging in a chaine for a Jewell … " The Indian he depicted on the map was, in Smith's words, "the greatest of them … The calfe of whose leg was three quarters of a yard about, and all the rest of his limbes so answerable to that proportion, that he seemed the goodliest man we ever beheld."

Engraved by William Hole, the map was the most comprehensive charting of the region up to that time. First printed in 1612, it was later published in Smith's book The Generall Historie of Virginia, New-England, and the Summer Isles (1624), which is the version shown here.