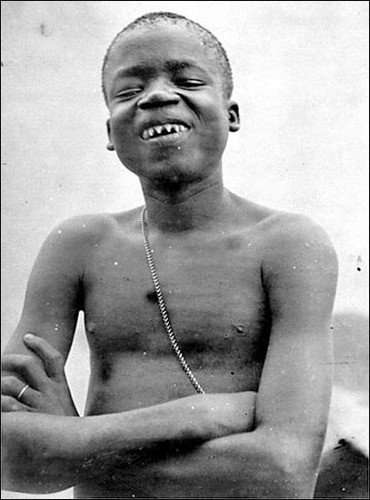 In a photograph taken circa 1904, Ota Benga's smile reveals that his teeth have been filed into sharp points in the traditional manner of his Pygmy tribe from the Congo. The image was made by renowned photojournalist Jesse Tarbox Beals.

A year earlier, Benga's wife and two children had been killed and he had been sold into slavery in his native land. Presbyterian missionary Samuel P. Verner purchased the African for a pound of salt and a bolt of cloth, gave him his freedom, and then brought him to the United States. Benga is believed to be the first African Pygmy to reside permanently in this country.

In 1904, Benga, who was approximately four feet, nine inches tall and weighed about one hundred pounds, appeared as part of a Pygmy village at the Saint Louis World's Fair; two years later he spent three weeks exhibited in a cage with apes at the Bronx Zoo in New York City, an event that created a public outcry. He subsequently spent three years in a Brooklyn, New York, orphanage before relocating to Lynchburg to attend the Virginia Theological Seminary and College. In Lynchburg, he befriended the seminary's president, his wife, and their children, as well as the poet Anne Spencer. Benga's attempts at assimilation ultimately failed, however, and he committed suicide on March 20, 1916.