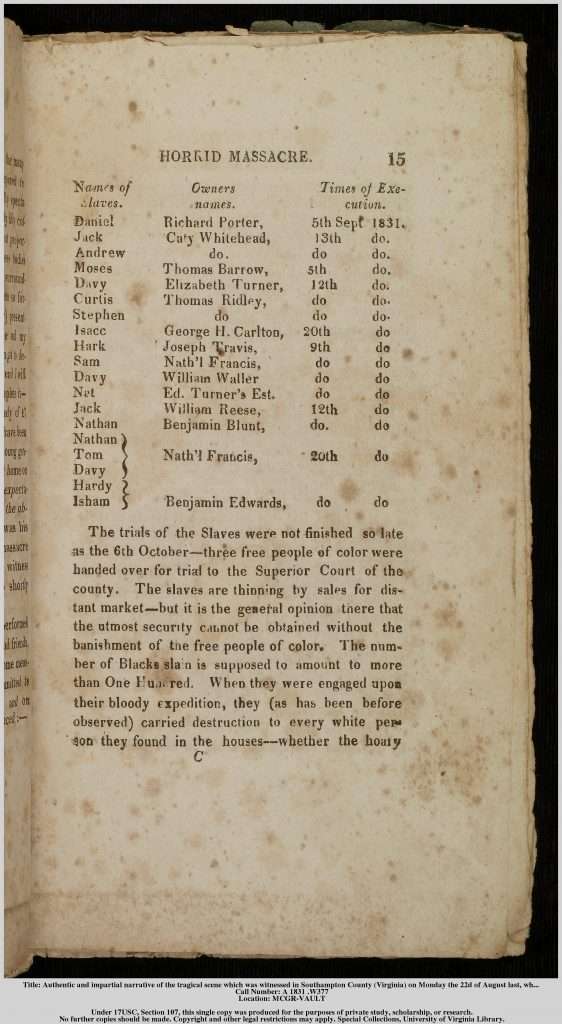 Partial List of Slaves Executed for the Nat Turner Uprising

A page from Samuel Warner's Authentic and Impartial Narrative of the Tragical Scene Which Was Witnessed in Southampton County (1831) includes a list of the enslaved men hanged in September 1831 for having taken part in a slave revolt led by Nat Turner on August 21–22, 1831. The list includes the names of the slaves' owners and the dates on which each slave was executed. The "Nat" listed here, owned by "Ed, Turner's Est.," was not the organizer of the revolt. The slave leader "Nat" was owned by Benjamin and then Samuel Turner and was not captured until October 30, 1831. He was subsequently hanged on November 11, 1831. About 120 African Americans were executed in the wake of the rebellion.

Citation: Authentic and Impartial Narrative of the Tragical Scene Which Was Witnessed in Southampton County (Virginia) on Monday the 22nd of August Last, When Fifty-five of its Inhabitants (mostly women and children) were inhumanly Massacred by the Blacks!  A 1831 .W377. Special Collections, University of Virginia, Charlottesville, Va.