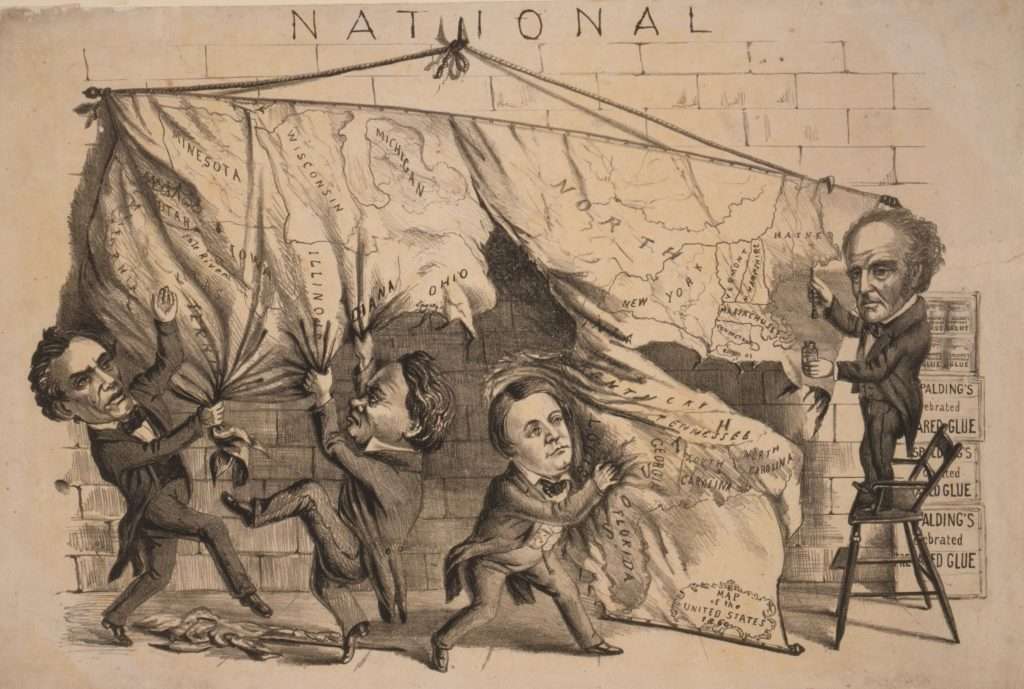 This 1860 political cartoon, entitled Dividing the National Map, satirizes the bitter U.S. presidential election of that year in which four candidates were vying for the office. A map of the country hangs in shreds, as it is torn apart by three of the candidates. Abraham Lincoln (at far left), the Republican candidate, and Stephen A. Douglas, the Northern Democratic candidate, claw at the western part of the country, as John C. Breckinridge (at center), the Southern Democratic nominee, rips at the South. The fourth, John Bell of the Constitutional Union Party (at right), attempts to mend the northeastern region of the map with a jar of "Spalding's," a popular adhesive glue of the era. Several crates of "Spalding's" lean stacked against the wall to the right of Bell.

The United States presidential election of 1860 was perhaps the most pivotal in American history. A year after John Brown's attempted slave revolt at Harpers Ferry, Virginia, the national debate over slavery had reached a boiling point, and several Southern states were threatening to secede should Lincoln win. Along with its Upper South neighbors, Virginia struggled with both the perceived threat of Northern abolitionism and the fear that secession would trigger war. The four major candidates, meanwhile, reflected a political system in chaos. The Republicans, who opposed the expansion of slavery into the western territories, best exploited the circumstances, winning 180 electoral votes and 39.8 percent of the popular vote. Reflecting Virginia's moderation, however, the state was one of only three to favor Bell. In the end, Lincoln's election led directly to South Carolina's secession and the American Civil War.