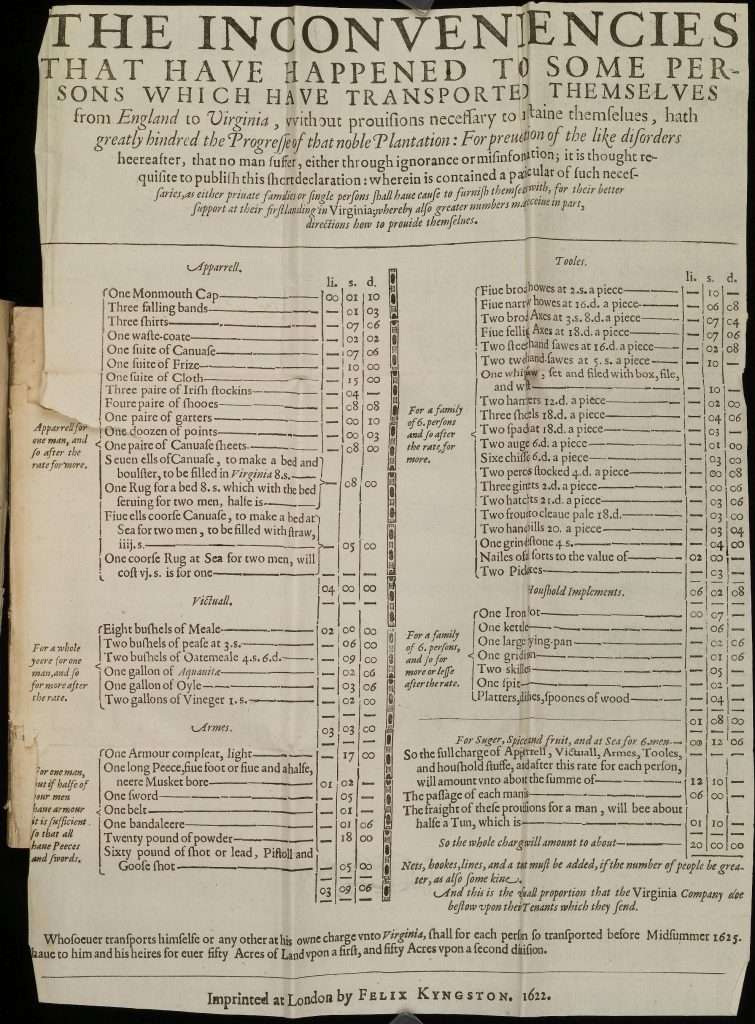 The Inconveniences That Have Happened to Some Persons which Have Transported Themselves from England to Virginia . . .

A fold-out page in A Declaration of the State of the Colony and Affaires in Virginia (1622), a report prepared and published by the Virginia Company of London, provides a list of provisions that a prospective colonist would need to survive in Virginia. The inventory includes items of clothing and bedding for the ocean voyage; foodstuffs such as peas, oatmeal, and oil and vinegar; armor, weapons, and gunpowder; a variety of axes, saws, and other tools; household implements such as dishes, an iron pot, and a kettle; and sugar, spice, and fruit for the days at sea. The estimated cost of the provisions and the passage to Virginia for one man was twenty pounds, and, according to this document, "this is the equall proportion that the Virginia Company doe bestow upon their Tenants which they send." This precise listing was designed to prevent the "inconveniences" faced by earlier colonists who had arrived ill-prepared, a condition which "greatly hindered the Progresse of that noble Plantation."

Citation: A Declaration of the State of the Colony and Affaires in Virginia. With a Relation of the Barbarous Massacre in the time of peace and League, treacherously executed by the Native Infidels upon the English, the 22 of March last. A 1622 .W37. Tracy W. McGregor Library of American History, Special Collections, University of Virginia Library, Charlottesville, Va.