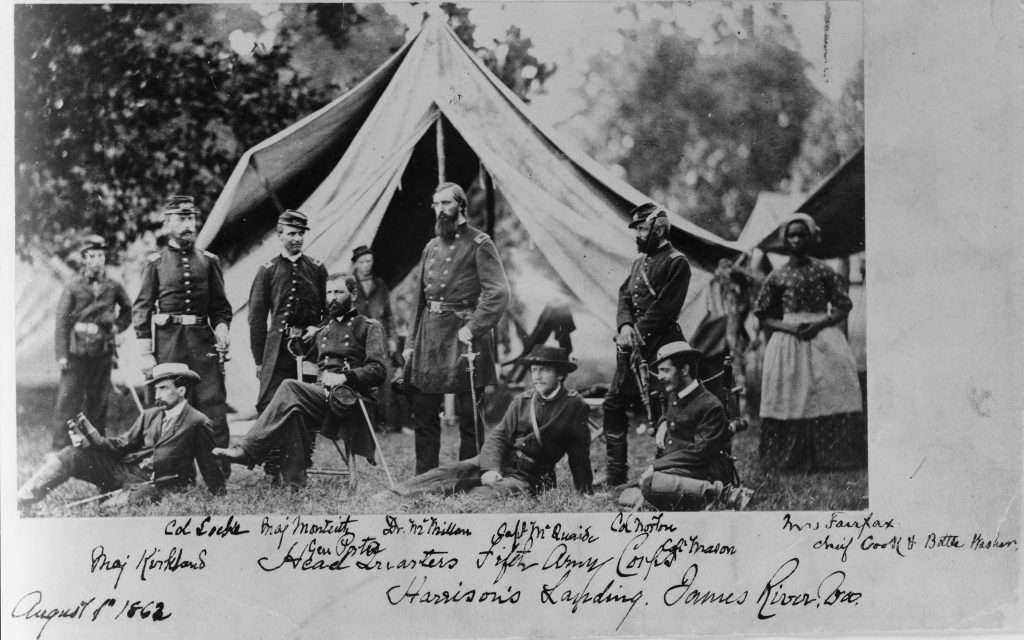 General Fitz John Porter, commander of the Union Fifth Corps, and his staff of seven officers pose in front of a tent at Harrison's Landing on the James River in August 1862. From left to right are Major Joseph Kirkland, Colonel Frederick T. Locke, Major George Monteith, Porter (seated), Dr. Charles McMillan, Captain John F. McQuade, Colonel C. B. Norton, and Captain William P. Mason. The African American woman on the far right, a Mrs. Fairfax, is identified as "chief Cook & Bottle Washer," an idiom suggesting someone who does a little bit of everything. A handwritten inscription on the back reads, "To Gen. Grindley with the compliments of Fitz John Porter." The general may have been James Glas Grindlay (also Grindley), who served in the Fifth Corps and, by the end of the war, was a brevet brigadier general.

The Photographic History of the Civil War (1911) dates this image to June 1862, just after the Seven Days' Battles; however, the Fifth Corps remained at Harrison's Landing until August 14–15. If, as the inscription suggests, the latter date is accurate, then this was just a few weeks before the Second Battle of Manassas, a Union defeat during which Porter was accused of disobeying an order and misbehaving before the enemy. He was convicted by court-martial and left the army, only to be exonerated in 1878.