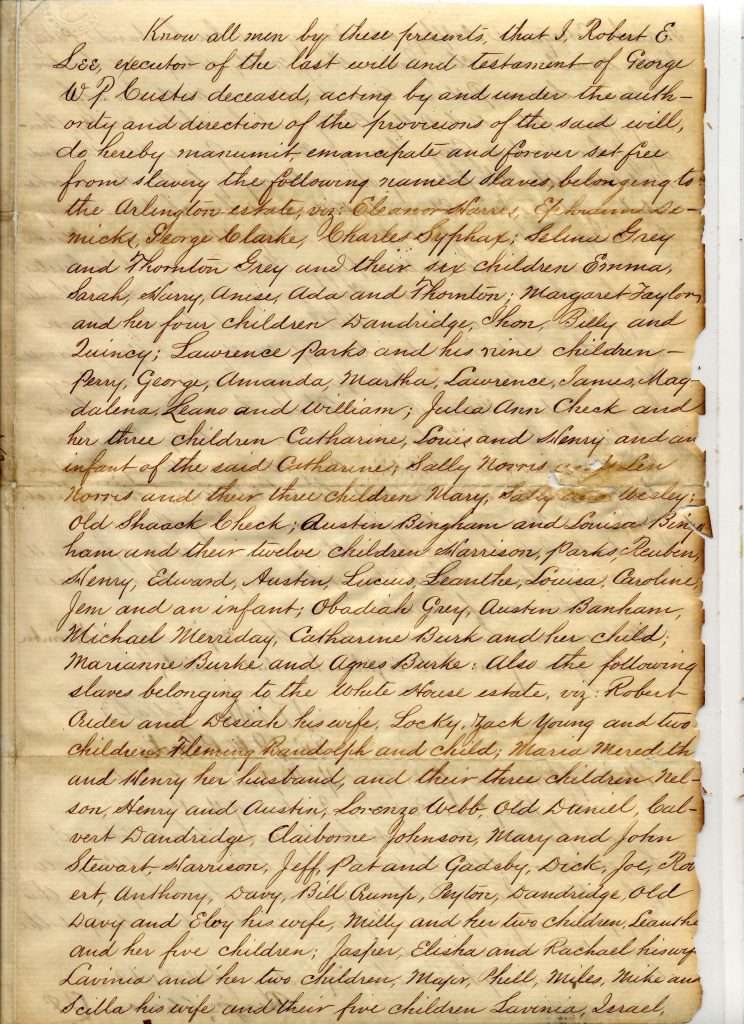 In this handwritten legal document, dated January 2, 1863, Robert E. Lee promises to "hereby manumit, emancipate and forever set free" the slaves once owned by his father–in–law, George Washington Parke Custis, who had died in 1857. The affairs of the Custis estate at Arlington had been messy, but in his will, of which Lee was the executor, Custis had stipulated that the slaves be released within five years. Lee interpreted this to mean that he could hold on to them for the full five years; however, the slaves assumed they were free upon Custis's death and escaped in large numbers. Thinking that the institution of slavery was inefficient but hardly a moral crime, Lee responded by hiring out many slaves and breaking up families.

Those families can be identified in this document, in which Lee finally liberates them by court order one day after the effective date of the Emancipation Proclamation. This, the first of the four–page deed of manumission, reads that "the following named slaves, belonging to the Arlington estate," be set free, including "Selina Grey and Thornton Grey and their six children Emma, Sarah, Harry, Anise, Ada and Thornton; Margaret Taylor and her four children Dandridge, [John], Billy and Quincy; Lawrence Parks and his nine children—Perry, George, Amanda, Martha, Lawrence, James, Magdalena, Leno, William … "

Taking responsibility for these slaves tested Lee's carefully wrought ideals about the just way of treating enslaved African Americans; it shattered his dreams of being a planter after the war and ended up being one of the most painful experiences of his life. Lee offered help to some of the freedmen in their attempts to hire themselves out as labor and he resisted efforts by the surrounding community to keep them in bondage.