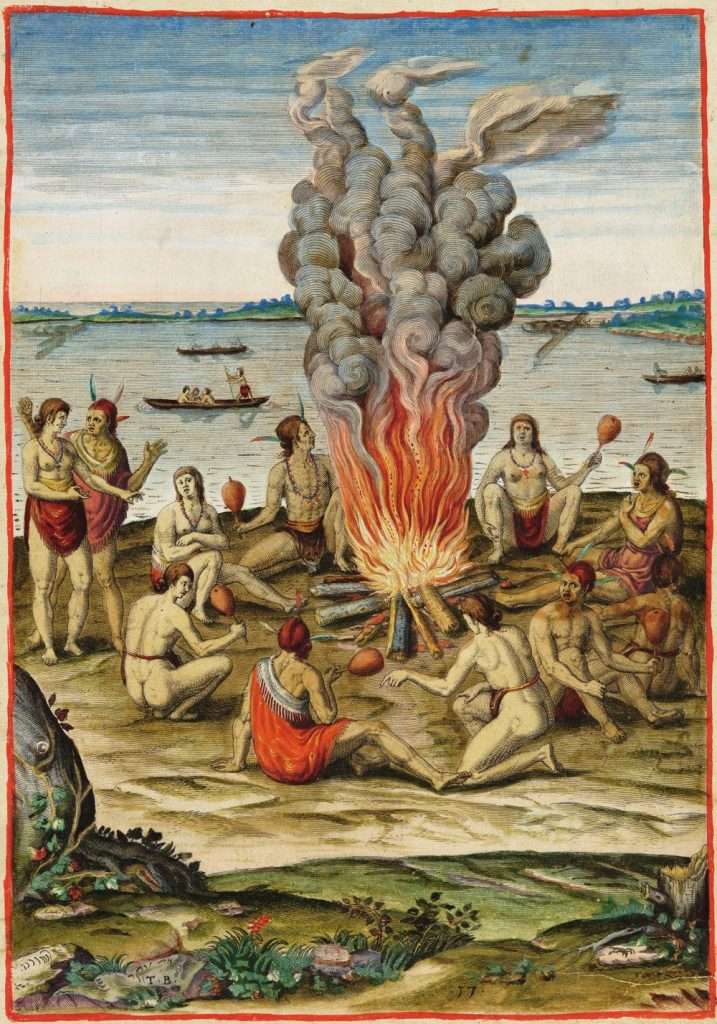 A group of Indians is portrayed performing a ceremony around a fire in this colored engraving by Theodor de Bry based on a watercolor painting by John White. Adding considerable detail to White's eyewitness sketch, de Bry shows life as it was lived by the Algonquian-speaking Indians in the Outer Banks region of present-day North Carolina. These Indians are closely related in language and culture to the Indians of Tidewater Virginia, and White's paintings are an important source of historical and ethnographic information about both groups.

White's original painting had no background or landscape. De Bry reversed the positions of the people sitting around the fire and added the two standing Indians (at left), his new details based on descriptions by Thomas Hariot, who accompanied White and approximately 600 colonists to Roanoke in 1585. In a caption to the engraving, Hariot wrote that the ceremony was one of thanksgiving: "When they have escaped any great danger by sea or lande, or be returned from the warr in token of Joye they make a great fyre abowt whiche the men and woemen [sit] together." The rattles, Hariot explained, were hollow gourds filled with "small stons or certayne bigg kernellt to make the more noise." Hariot described the singing, praying, and noise-making as "a strange custome, and worth the observation."

De Bry's engravings accompanied A Briefe and True Report of the New Found Land of Virginia, Hariot's description of his year at Roanoke, which was intended to serve, in part, as a justification for further colonizing efforts. These rare, hand-colored versions of the illustrations appeared in a 1590 edition published in Latin.