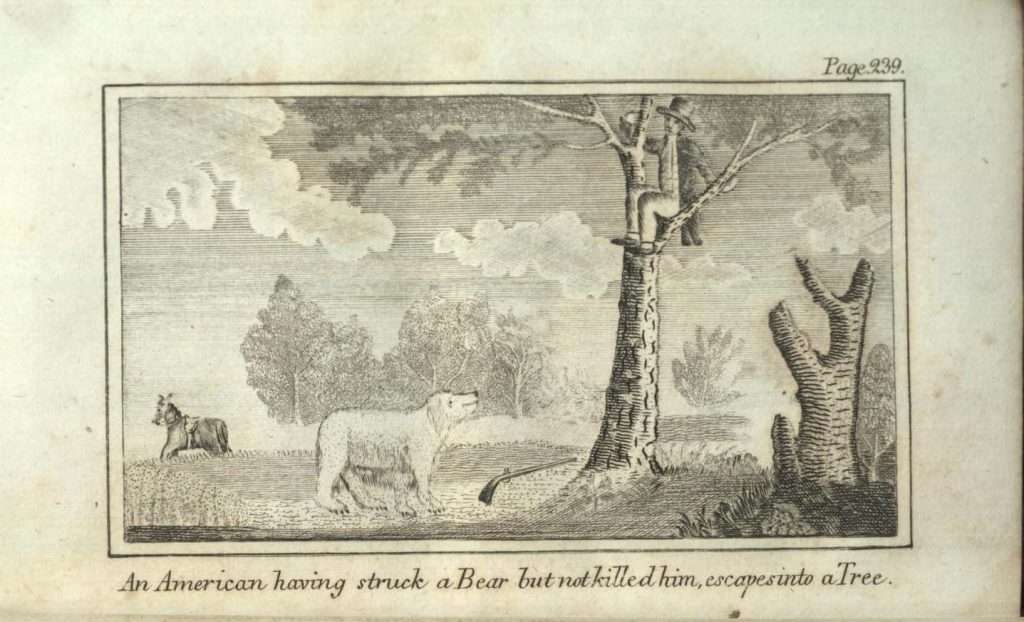 An American having struck a Bear but not killed him, escapes into a Tree.

The second edition of Patrick Gass's A Journal of the Voyages and Travels of a Corps of Discovery, Under the Command of Capt. Lewis and Capt. Clarke of the Army of the United States, From the Mouth of the River Missouri Through the Interior Parts of North America to the Pacific Ocean, During the Years 1804, 1805 and 1806 (1810) includes six engraved scenes from the Lewis and Clark Expedition. This depicts an event that took place on July 15, 1806. An expedition member, alone in the wilderness, encountered a white bear and was thrown by his horse. The man stunned the bear by hitting him with his gun—breaking the gun in the process—and then clambered up a tree. The man remained there for three hours while the bear stood vigil below. When the animal finally wandered off, the man headed back to camp. Gass, who served as a sergeant in expedition and kept a personal journal during their travels, wrote: "These bears are very numerous in this part of the country and very dangerous, as they will attack a man every opportunity."

This edition of the journal was printed by Mathew Carey of Philadelphia. The first edition of Gass's work, published in 1807, did not include any illustrations. Gass may have created the drawings himself, or he may have consulted with another artist. Gass's journal was the first such account published about the expedition; in it, he coined the term "Corps of Discovery."