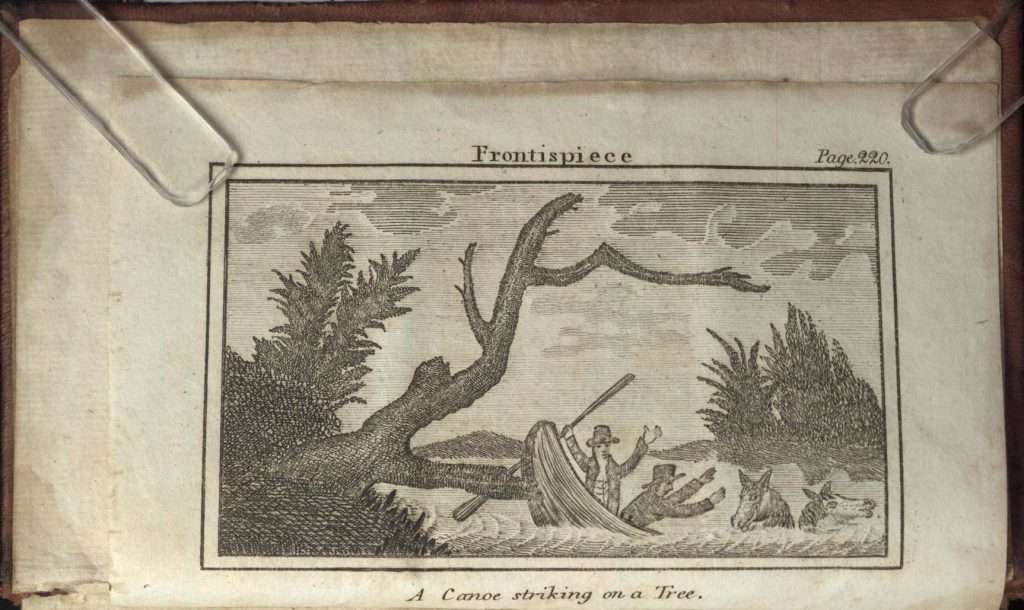 A Canoe striking on a Tree.

The second edition of Patrick Gass's A Journal of the Voyages and Travels of a Corps of Discovery, Under the Command of Capt. Lewis and Capt. Clarke of the Army of the United States, From the Mouth of the River Missouri Through the Interior Parts of North America to the Pacific Ocean, During the Years 1804, 1805 and 1806 (1810) includes six engraved scenes from the Lewis and Clark Expedition, including this depiction of an event that took place on May 30, 1806. While crossing a river, two expedition members in a canoe struck a tree that was protruding into the water. The boat sank and three blankets were lost. Most of the men had only brought along a single blanket for the trip; thus, the loss of blankets was considered a great blow.

Gass served as a sergeant in the Lewis and Clark Expedition and kept a personal journal during their travels. This edition of his journal was printed by Mathew Carey of Philadelphia. The first edition of Gass's work, published in 1807, did not include any illustrations. Gass may have created the drawings himself, or he may have consulted with another artist. This image was used as the frontispiece of the book. (The page number shown on the upper right refers to the page in the text where the event is described.) Gass's journal was the first such account published about the expedition; in it, he coined the term "Corps of Discovery."