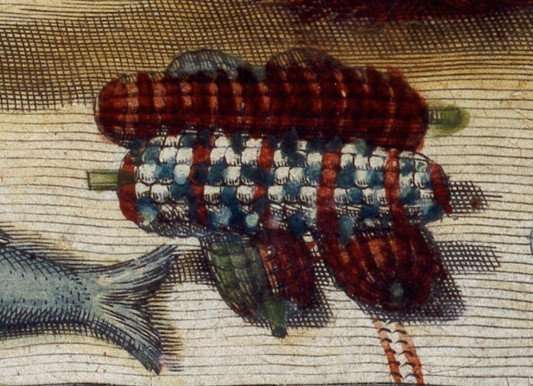 A detail from a late 16th-century engraving depicting American Indian life shows ears of corn, a staple of the native diet, stacked like pieces of firewood. Virginia Indians of that era ate more corn (maize) than any other crop, sucking unripe ears for their sweet juice, baking cornbread, or roasting it. They also made cooking wrappers, baskets, and mats out of the husks. What is known of Indian cooking in this period is based on research from paleobotanists and paleozoologists about what wild foods were available, as well as eye-witness accounts from English colonists. Most of these accounts concern the Algonquian-speaking Powhatans, but they likely apply to the speakers of Siouan and Iroquoian languages in Virginia.