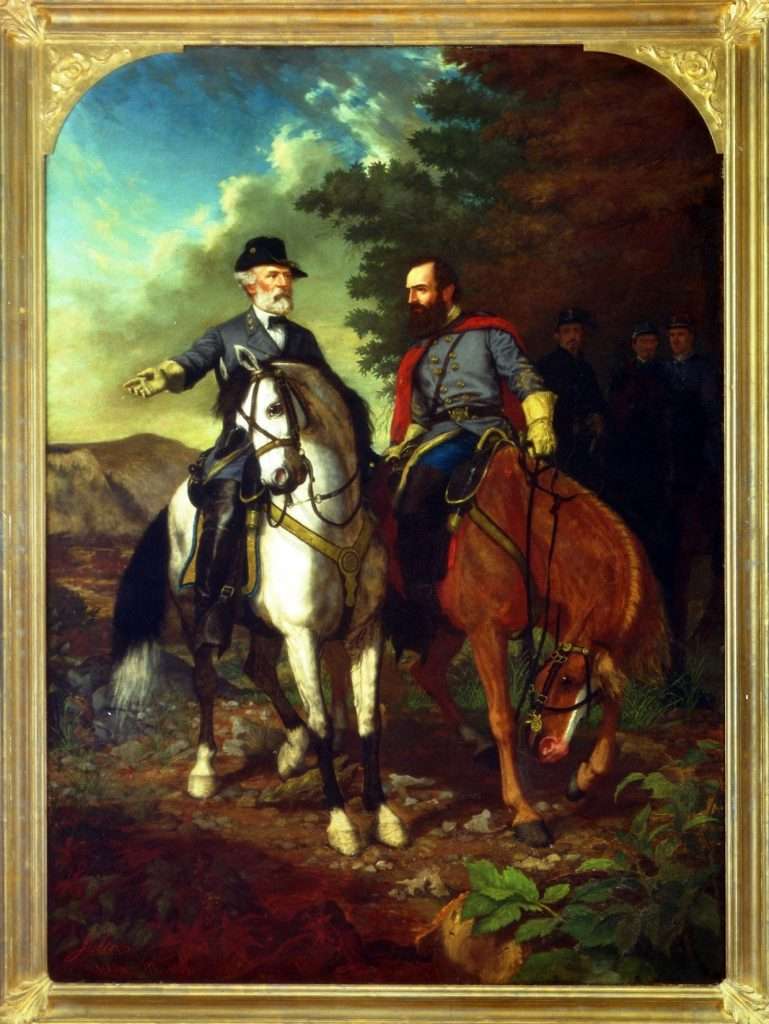 This large oil painting by Everett B. D. Julio was completed in 1869 and portrays Confederate generals Robert E. Lee and Thomas J. "Stonewall" Jackson on the evening of May 1, 1863, during the Battle of Chancellorsville. The two were then finalizing plans for Jackson's entire corps, on the following day, to march twelve miles under the cover of the Wilderness, past an old iron furnace, and around to Union general Joseph Hooker's vulnerable right flank. The surprise attack was a success, but as Jackson scouted the front for a possible night attack, he was struck down by friendly fire and died eight days later.

Julio's painting, originally titled The Heroes of Chancellorsville, has become an icon of the Lost Cause view of the Civil War. According to the historian Gary W. Gallagher, it reflects the Lost Cause's preoccupation with military leaders and with Lee and Jackson in particular. "The image captures Confederate hopes at flood tide, with Gettysburg, never mind Appomattox, still in the future," Gallagher has written.

Jackson's wounding and death "adds special poignancy to the scene," according to Gallagher, who has also noted that "Julio saw no need to add battle flags or other trappings of Confederate patriotism … Neither did the artist worry about getting details correct: Jackson wore a far less impressive uniform during the battle, for example, and the rolling, heavily wooded terrain near Chancellorsville boasts nothing like the imposing ridge behind Lee and Traveller."

Julio, a native of the island of St. Helena who emigrated to the United States in 1860, corresponded with Lee while working on the painting and offered him the finished work. Lee refused, writing, "It is not that I do not appreciate your feelings, or value your kindness, that I cannot accept your picture, but that I desire you to have all the benefit as well as the credit of your labors." Julio died in debt in 1879, his painting never having sold.