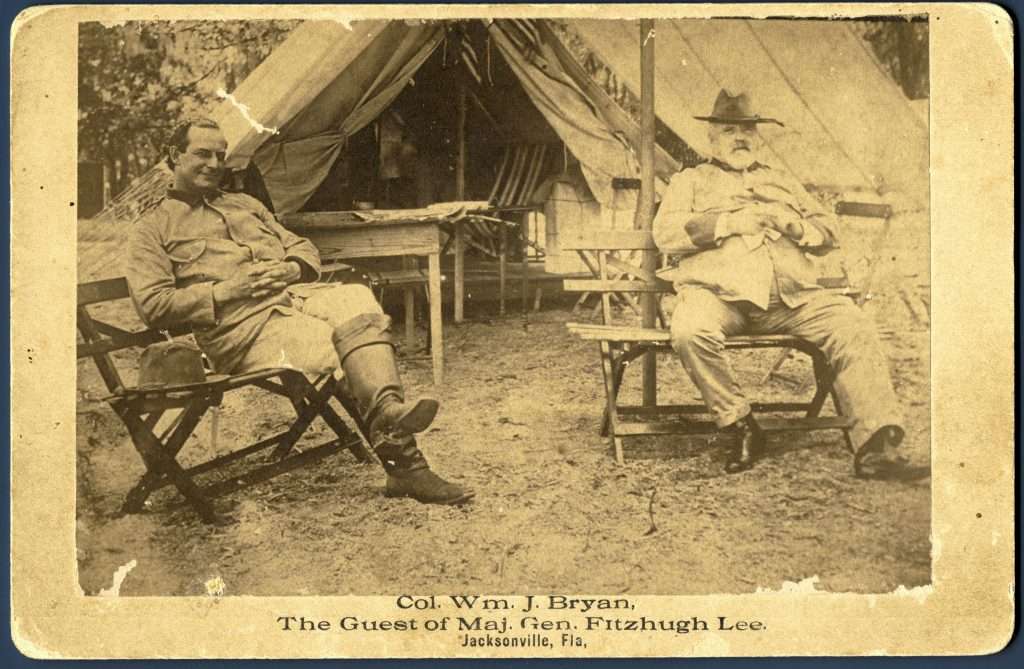 Fitzhugh Lee became a national hero thanks to his well-publicized promotion of American interests as United States consul general in Havana, Cuba, on the eve of the Spanish-American War (1898). Though he initially counseled against rushing into conflict after the sinking of the USS Maine battleship in Cuba, Lee supported the war once it was declared, and he was offered a major general's commission in the volunteer forces earmarked to invade the island. His command, the Seventh Army Corps, was still in training camp in mid-July when the fighting ended in American victory.

The following photos show Lee in the aftermath of the conflict. He sits with his guest, politician and then–Colonel William Jennings Bryan, at Cuba Libre Camp in Jacksonville, Florida, in September 1898. In the second photo a crowd of Cubans cheer on General Lee as he enters Havana at the head of his army on January 1, 1899. The Spanish left the island that day according to the terms of the surrender agreement and Lee formally assumed command of the occupation of the Military Province of Havana. Several months later the neighboring province of Pinar del Río was also placed under his control.

Lee reported on the "deplorable" conditions he found in the wake of the Spanish evacuation: "Business of all sorts was suspended. Agricultural operations had ceased; large sugar estates with their enormous and expensive machinery were destroyed; houses burned; stock driven off … or killed. There was scarcely an ox left to pull a plow, had there been a plow left." Lee tried to ease the suffering of the Cuban people who had long been mired in subjugation and poverty, but his efforts were hampered by the U.S. government's lack of a clear-cut plan for Cuba beyond its pacification. Frustrated by his inability to influence occupation policy, Lee left his position in November 1900.