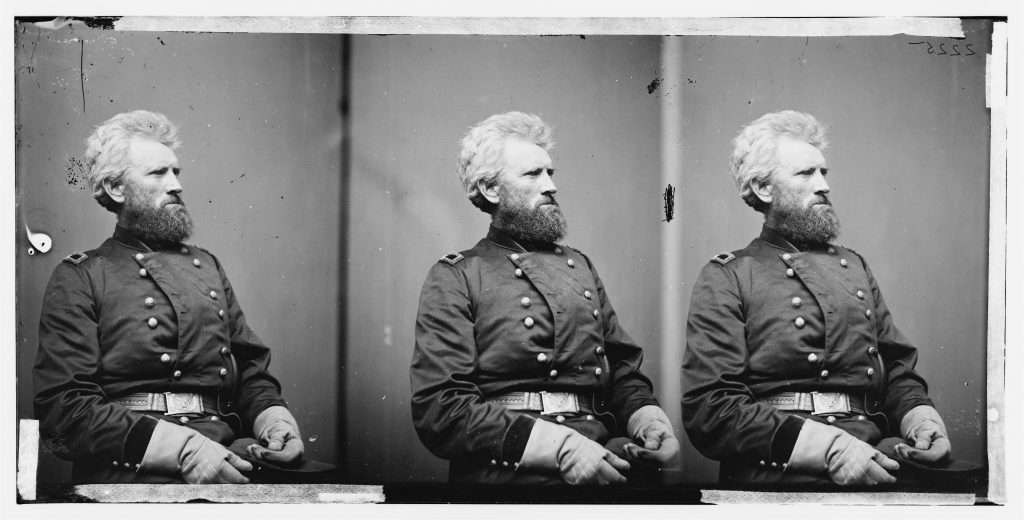 A single wet glass-plate negative shows the image of Union general Robert H. Milroy in triplicate. His shoulder straps appear to have the single star of a brigadier general, the rank the Indiana-born lawyer bore during the Shenandoah Campaign of 1862. At the Battle of McDowell on May 8, Milroy led a surprise attack on the larger Confederate forces on the mountain above and managed to inflict twice the number of casualties that his own troops sustained.

The war went downhill from there for Milroy. Early in 1863, he took command of the Department of Winchester and, on January 5, enforced Abraham Lincoln's Emancipation Proclamation with a proclamation of his own, provocatively titled, "Freedom to Slaves!" Although he admonished African Americans against violence, residents of the Shenandoah Valley were nevertheless concerned. In the meantime, Milroy became so consumed with the task of identifying and punishing Confederate sympathizers, he forced even widows and children out of their homes on mere suspicion.

As Virginia put a $1,000 bounty on his head, he wrote to his wife: "I can now realize something of the weighty and unpleasant responsibility that rests on a king … my will is absolute law—none dare contradict or dispute my slightest word or wish … both male and female tremble when they come into my presence … I feel a strong disposition to play the tyrant among these traitors."

In June 1863, now–Major General Milroy's command was almost completely destroyed at the Second Battle of Winchester, and although Lincoln exonerated him after a court of inquiry, the president refused to help him find a new command. In a letter to the general, Lincoln cited Milroy's constant "imputations against your superiors" and his wrong-headed belief that he was persecuted for not having gone to West Point. "This, my dear general, is I fear, the rock on which you have split."