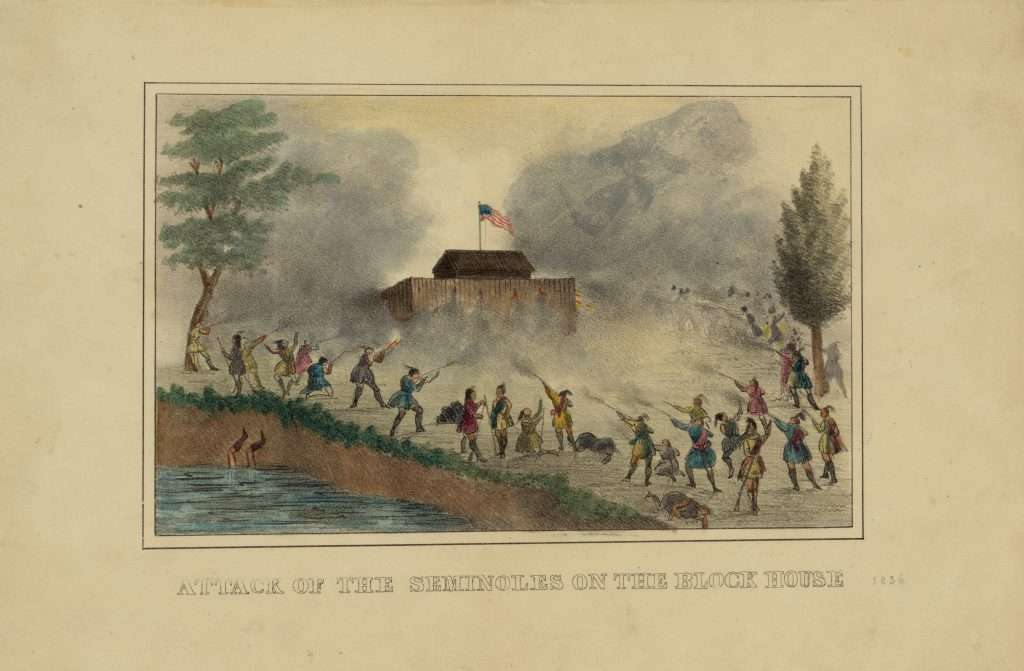 Seminole Indians fire upon a military fortification in December 1835 during the Second Seminole War (1835–1842). The United States had acquired Florida in 1821 and signed several treaties with the Seminole Indians, including one in 1833 that would force the Indians to move out of the region. Many Seminoles repudiated the agreements and fiercely resisted white encroachment. Tensions grew, and in 1835 war broke out. Major Francis Dade led a detachment of 100 soldiers to stop minor incidents of violence that were being committed by the Seminole. Dade's entire party was wiped out, and, in response, the United States dispatched General Winfield Scott to Florida with one of the largest forces assembled since the War of 1812. Scott arrived in Florida in January 1836 and launched a military campaign in March which ended abruptly in failure. The general used conventional tactics—converging columns—against a foe well-schooled in guerrilla and irregular warfare.

In the aftermath, Scott was brought before a court of inquiry. He indignantly told the court that he was "unable … to remember one blunder in my recent operations, or a single duty neglected" and proceeded to blame others for his failure. The press, having covered the campaign from the beginning, followed the acrimonious proceedings in great detail, and Scott took care to plead his own spirited defense to reporters. The court of inquiry generally agreed with Scott's assessment, finding "it difficult to come to a conclusion as to the real causes of the failure of the campaign." It did, however, note with distaste that Scott had conducted much of his defense publicly through the newspapers.