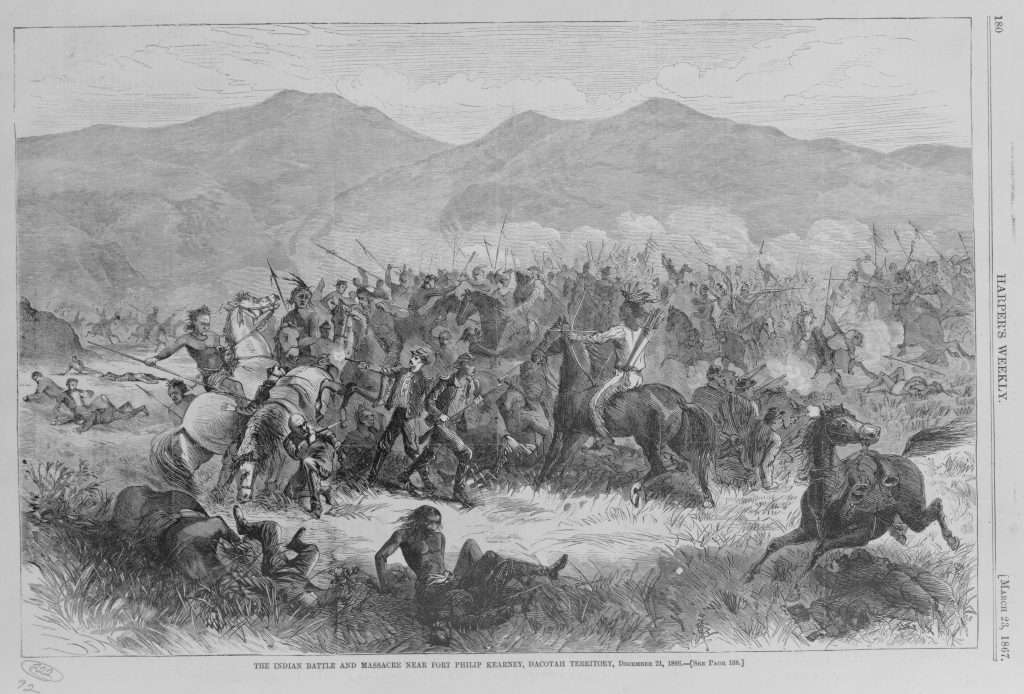 Outnumbered U.S. infantry and cavalrymen are ambushed by northern plains Indians near Fort Phil Kearny, Dakota Territory (in present-day Wyoming), on December 21, 1866, in an event that came to be known as the Fetterman Massacre by the soldiers—and the Battle of the Hundred Slain by the victorious Native Americans. A relief party under Captain William J. Fetterman had been led into a trap that day; he and all eighty of his men perished in the worst U.S. defeat at the hands of the plains Indians until the Battle of the Little Big Horn a decade later. The Fetterman debacle occurred during the opening months of Red Cloud's War, an uprising by a coalition of northern plains Indians led by Lakota chief Red Cloud against the U.S. Army that continued until 1868. The bodies of Fetterman's soldiers were mutilated in the aftermath of the battle. In his official report the commander of Fort Phil Kearny, Colonel Henry B. Carrington, gave a litany of atriocities committed: "Eyes torn out and laid on rocks. Noses cut off. Ears cut off. Chins hewn off … Entrails taken out and exposed. Hands cut off. Feet cut off. Arms taken out from socket. Private parts severed and indecently placed on the person … " Though that particular graphic report was suppressed and not published for twenty years, news of the disaster was covered extensively in the American press, including an article in the March 23, 1867, edition of Harper's Weekly, which included this engraving.

As head of the Department of the Platte, General Philip St. George Cooke had been in overall command of the men involved in the disaster and he placed the blame squarely on Carrington. Cooke relieved Carrington of his command five days after the battle. In turn the head of the U.S. Army, General Ulysses S. Grant, held Cooke at least partially responsible for the stunning defeat. Cooke was removed from his post and reassigned. Several formal investigations followed, and Carrington was eventually exonerated by an inquiry initiated by the Secretary of the Interior.