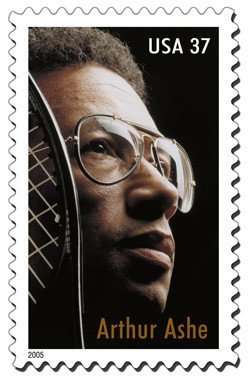 In 2005, the U.S. Postal Service issued this commemorative stamp honoring Arthur Ashe, the first black men's tennis champion at the U.S. Open and Wimbledon, and a well-known activist. The photograph reproduced on the stamp was taken by Michael O'Neill for the cover of the December 21, 1992, edition of Sports Illustrated in which Ashe was named "Sportsman of the Year." Ashe died on February 6, 1993.