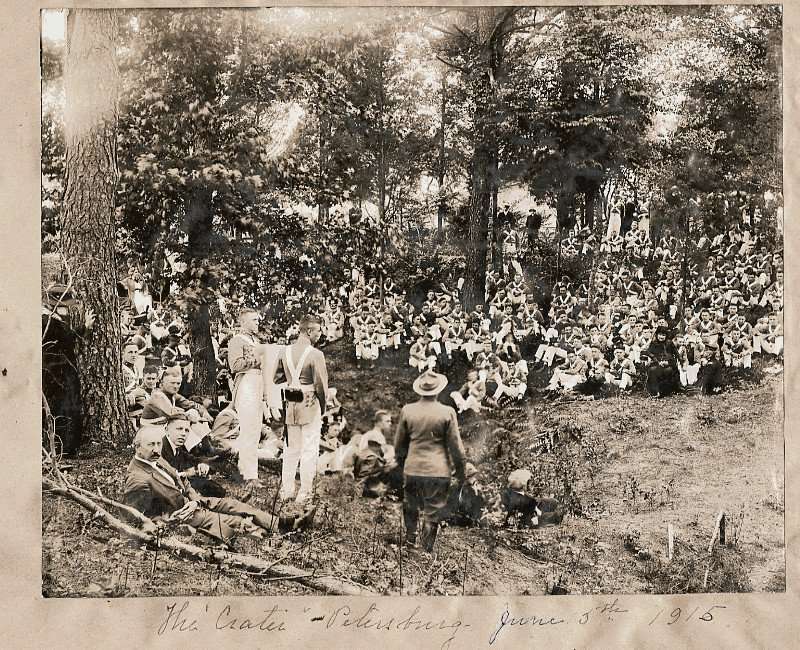 1915 Gathering at the Crater

Virginia Military Institute cadets visiting the site of the Battle of the Crater in June 1915 are joined by Mary Custis Lee, one of General Robert E. Lee's daughters, seated at right. The depression in the landscape created by an enormous Union explosion beneath Confederate lines on the morning of July 30, 1864, is still visible. Confederate general William Mahone, who graduated from VMI in 1847, rallied his troops to action and became the hero of the battle. In the years following the war, former Confederates focused on the heroism of their soldiers at the battle and minimized allegations that a race-based massacre had occurred. In 1927, the United Daughters of the Confederacy erected an obelisk commemorating Mahone with the inscription "To the memory of William Mahone Major General C.S.A. a distinguished Confederate commander, whose valor and strategy at the Battle of the Crater July 30, 1864 won for himself and his gallant brigade undying fame. A citizen of Petersburg, Virginia, born Dec. 1, 1826, died Oct. 8, 1895. Erected by Petersburg chapter U.D.C."