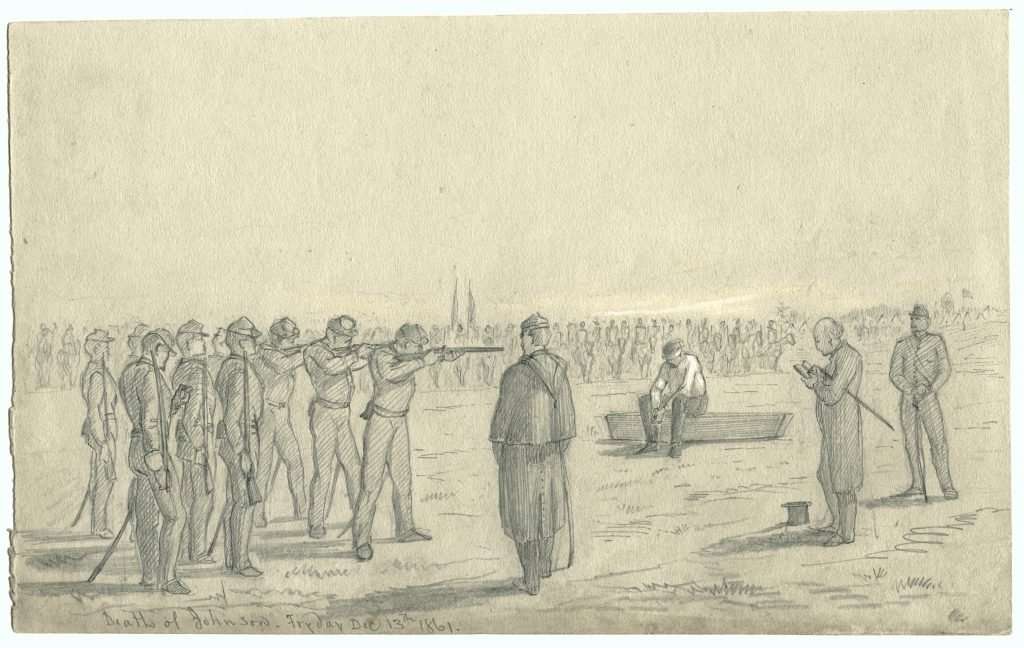 A blindfolded prisoner, private William H. Johnson of Co. B, 1st New York Cavalry Regiment, awaits his fate as a firing squad prepares to execute him. The doomed man sits atop his own coffin. A clergyman at right intones the final prayers, and a soldier behind the firing squad checks his watch so that the prisoner will be shot at the appointed time.

This pencil-and-chalk drawing was made by twenty-one-year-old Alfred Wordsworth Thompson, an artist for Harper's Weekly and the Illustrated London News who made a series of nineteen drawings during the opening months of the Civil War, all of them set in Virginia. A handwritten caption at bottom identifies the scene as the "Death of Johnson - Fryday [sic ] Dec. 13th 1861,&quot. Johnson was the the first soldier in the Army of the Potomac to be executed for desertion.

Though born in Baltimore, Maryland, in 1840, Thompson had spent considerable time in Virginia, as his maternal grandparents lived there and he had often summered with them. After sketching scenes of military life in Virginia in 1861, Thompson went to Paris, where he pursued formal studies in art. He later became a well-known artist of American historical genre paintings; in addition, he created paintings inspired by time he spent in North Africa and Asia Minor.