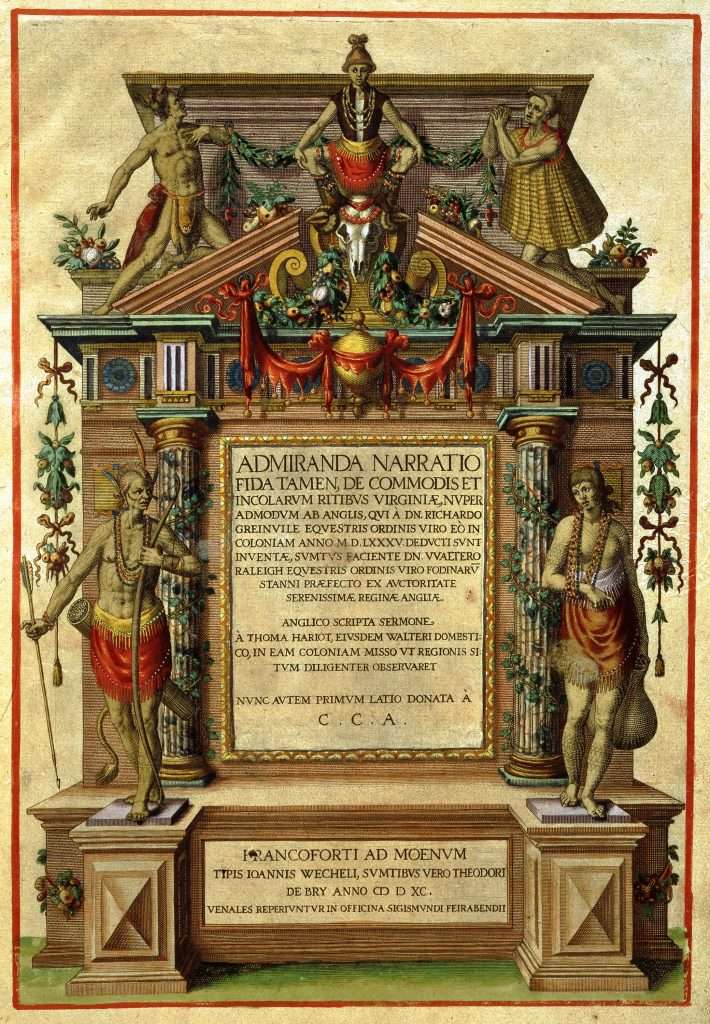 Figures of Indians, as well as copious fruits and vegetables that highlight Virginia's abundance, embellish the title page of a 1590 Latin edition of Thomas Hariot's A briefe and true report of the new found land of Virginia. The book, initially published without illustrations in 1588, was a firsthand account of the Roanoke colony where Hariot went with artist John White and approximately 600 colonists in 1585. The text was written, in part, as a justification for further colonizing efforts, and the book includes reports on the commodities found there as well as the "nature and manners of the naturall inhabitants."

This hand-colored engraving was made by Theodore de Bry, who based his figures on White's earlier watercolor paintings. At the top of the illustration is Kiwasa, the wooden idol in the town of Secota who guarded the royal corpses in the temple. (There is no extant drawing of the idol by White, though Kim Sloan, curator of British drawings and watercolors at the British Museum, argues that there likely was one.) At left, gesturing toward the idol, is a magician; to the right is a priest. Flanking the columns at the bottom are a chief and a noble Indian woman. Adding considerable detail to White's eyewitness sketches, de Bry's engravings show the Algonquian-speaking Indians in the Outer Banks region of present-day North Carolina. These Indians are closely related in language and culture to the Indians of Tidewater Virginia, so White's paintings are an important source of historical and ethnographic information about both groups.