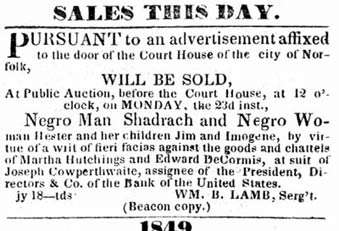 Advertisement for Auction of Shadrach Minkins

An advertisement in the July 23, 1849, edition of the Norfolk and Portsmouth Herald announces that day's auction of the "Negro Man Shadrach and Negro Woman Hester and her children," a sheriff's sale to cover the owner's unpaid business debts. Shadrach Minkins was sold that day to John A. Higgins of Norfolk, and then sold again four months later to Higgins's father-in-law, John DeBree, a career naval officer who lived in Norfolk. Months later, in May 1850, Minkins escaped to Boston.