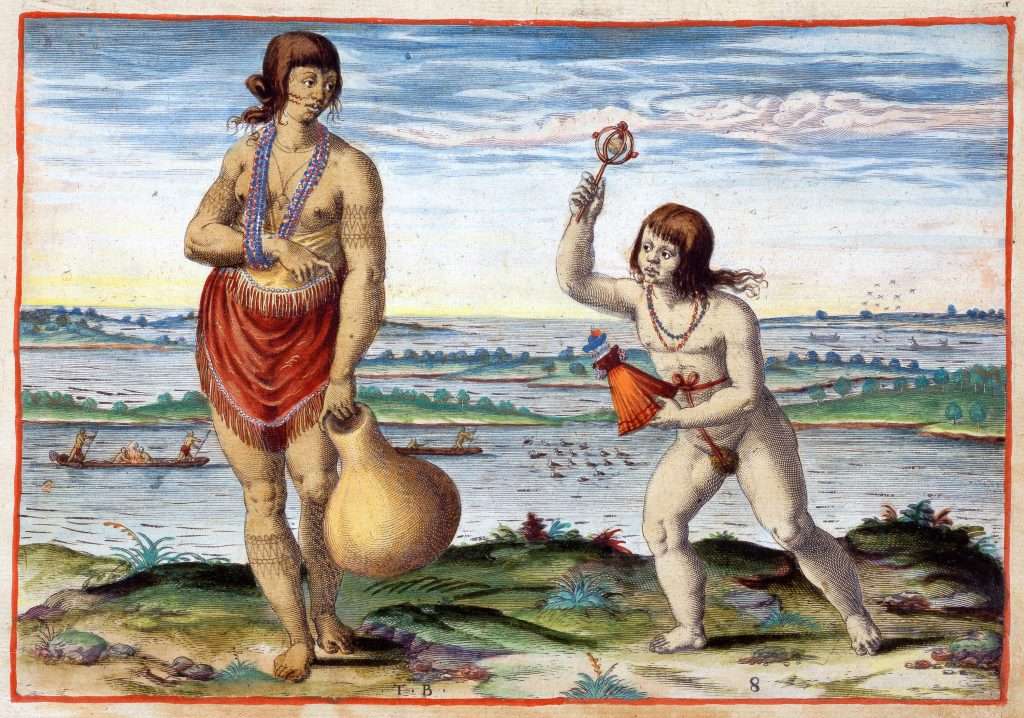 A wife of an Indian weroance, or chief, carries a gourd while her eight-to-ten-year-old daughter waves a European rattle and holds a well-dressed doll in this colored engraving by Theodor de Bry based on a watercolor painting by John White. Adding considerable detail to White's eyewitness sketch, de Bry shows life as it was lived by the Algonquian-speaking Indians in the Outer Banks region of present-day North Carolina. These Indians are closely related in language and culture to the Indians of Tidewater Virginia, and White's paintings are an important source of historical and ethnographic information about both groups.

In White's original painting the young girl was considerably smaller, and she had no rattle but only a fancy doll of the sort that would be owned by children of wealthy English parents. Being the daughter of a chief, the young girl received a more expensive type of doll than the kind usually used in trade. De Bry based his engravings in part on descriptions by Thomas Hariot, who accompanied White and approximately 600 colonists to Roanoke in 1585. In a caption to the engraving, Hariot wrote that the young Indian girls were "greatlye Diligted with puppetts, and babes which wear brought oute of England." He noted further that the hollowed gourd carried by the mother contained "some kinde of pleasant liquor," though in reality such gourds usually contained water. This image indicates that despite her high status, the mother had to perform chores expected of all women.