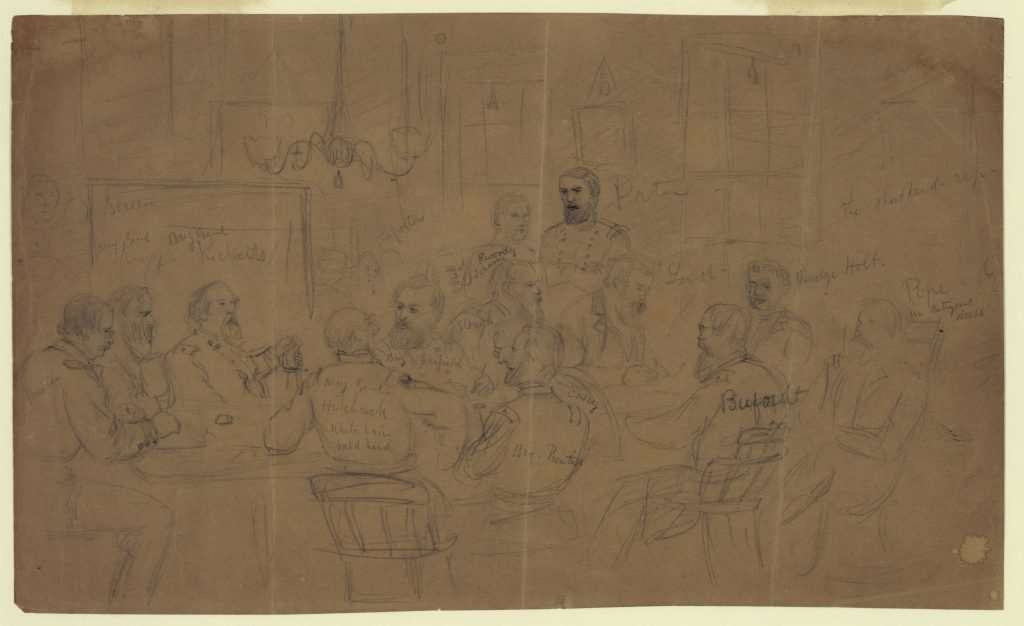 Union general Fitz-John Porter stands behind the table, his arms folded, during court-martial proceedings being conducted against him. Porter was accused by his superior officer, General John Pope, of disloyalty and of having disobeyed orders to attack Confederate forces under General Thomas J. "Stonewall" Jackson during the Second Battle of Manassas.

This pencil sketch by Harper's Weekly artist Alfred R. Waud shows the members of the court judging Porter: generals David Hunter, Napoleon Bonaparte Buford, James Ricketts, Ethan Allen Hitchcock, James A. Garfield, John P. Slough, Benjamin Prentiss, Silas Casey, and Rufus King. (William Blair Lord was the stenographer.) Judge Joseph Holt, who presided over the trial, sits at the far right, next to the accuser, General John Pope. In this unfinished drawing Waud notes that Pope is not in uniform but is "in citizens dress." He also notes that General Hitchcock has "white hair bald head." The court-martial began in December 1862 and ended on January 10, 1863. Porter was found guilty, forced out of the army, and barred from holding any further government post, though many suspected that one of the witnesses, General Irvin McDowell, may have perjured himself. Porter fought the verdict for years, and an army review board finally overturned it in 1879.