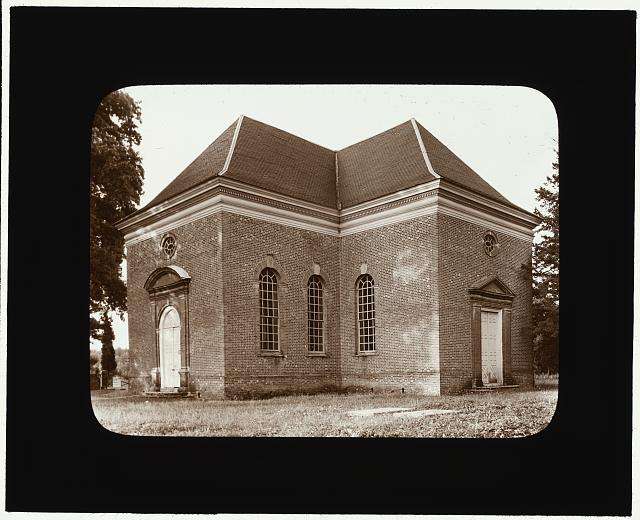 This twentieth-century photograph shows the exterior of Christ Church in Lancaster County, which is considered the most sophisticated and best-preserved eighteenth-century church in Virginia. The one-story structure features exterior bricks laid in Flemish bond style, a steep hipped roof, and a cruciform, or cross-shaped, plan; the interior retains original high-back pine pews. The church was commissioned by Robert "King" Carter, the richest Virginian of his day who lived nearby at his family's estate, Corotoman. The church has changed little since it was completed in 1735, three years after Carter's death. In his will Carter, a vestryman of Christ Church Parish, left 200 pounds sterling for the project, stipulating "that there be preserved to my family a commodious pew in the new Chancel."

This glass lantern slide image was made in 1930 by Frances Benjamin Johnston, a photographer from Washington, D.C., who had been commissioned to photograph colonial-era Virginia churches for a book by architectural historian Henry Irving Brock.