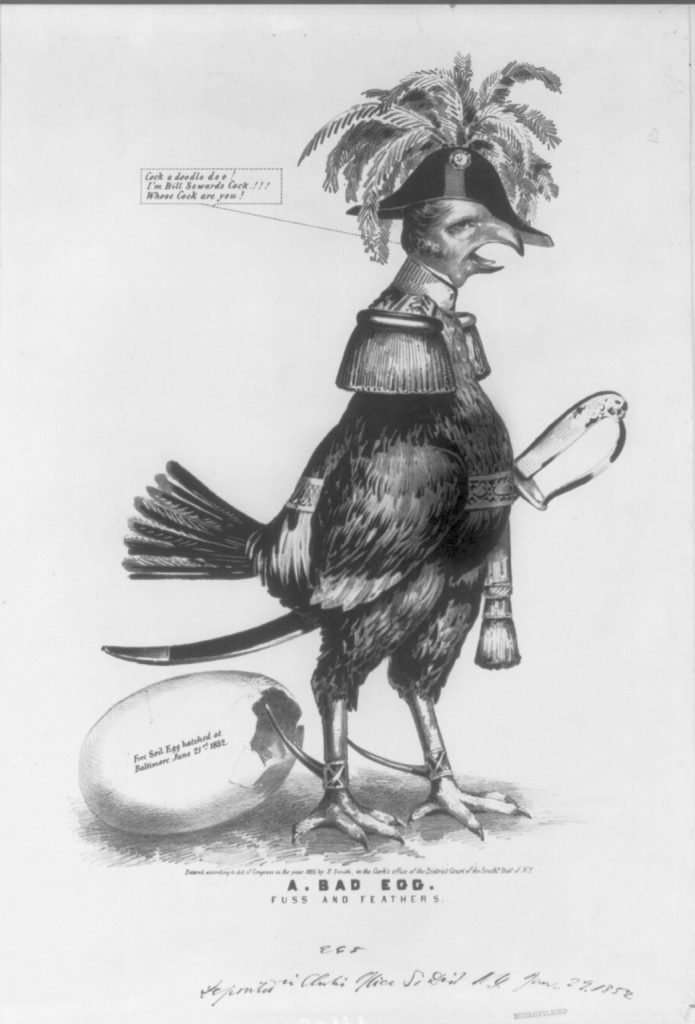 Whig presidential candidate Winfield Scott is pictured as a fighting cock with human attributes in this 1852 lithograph by New York printers Currier and Ives. The cock wears fringed military epaulets, a sword, spurs, and a plumed hat, playing upon Scott's nickname "Old Fuss and Feathers," which was based on his vanity and love of military accoutrements. The figure has just emerged from an egg marked "Free Soil Egg hatched at Baltimore June 21st 1852."—the date and place where Scott was nominated. The egg lies broken at the cock's feet, reflecting the popular belief that Scott was a candidate of the antislavery faction of the Whig Party. According to the title below, it is "A. Bad Egg." that has spawned Scott's nomination. The caricature crows, "Cock a doodle doo! I'm Bill Sewards Cock!!! Whose cock are you?" This refers to antislavery leader William Henry Seward and makes the case that Scott was in league with Seward's strident abolitionist views.

In fact, Scott was a moderate and pleased few in the Whig Party. His views on slavery were middle of the road, as evidenced by a letter he wrote to the editor of the Danville Reporter in 1843. Though he claimed that he had been in favor of a gradual emancipation of slaves ever since his boyhood, Scott was also adamant that the federal government should have no role in that process: "In my opinion," he wrote, "congress has no color of authority under the constitution, for touching the relation of master and slave in a state." He went on to say that "I own, myself, no slave; but never have attached blame to masters for not liberating their slaves." And he was even able to find some "compensating benefit" from the "evil" of slavery, arguing that the institution allowed the "bleeding African" to become "acquainted with the arts of civilization, and, above all, brought under the light of the gospel. "

Scott was defeated in the 1852 presidential election by the Democratic candidate Franklin Pierce. Scott retained his rank as general, but refused to reside in proximity to his former competitor. He moved to New York City, and from there, Scott engaged in a variety of feuds and disputes with Pierce appointees in Washington, D.C., including Secretary of War Jefferson Davis.