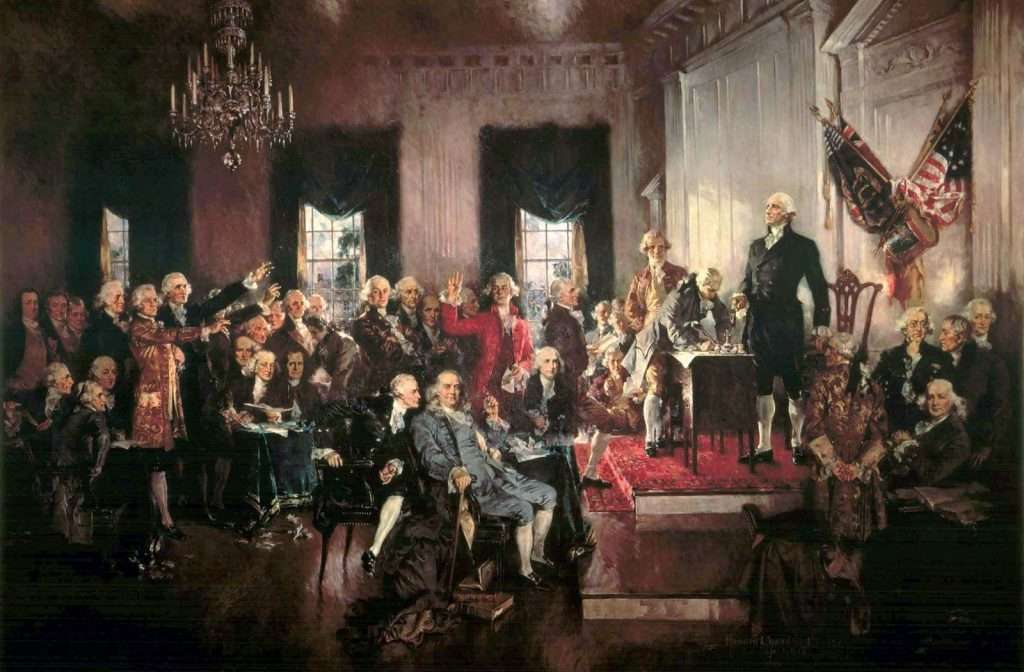 Scene at the Signing of the Constitution of the United States

Delegates to the Constitutional Convention, held at Independence Hall in Philadelphia, sign the new United States Constitution on September 17, 1787. George Washington, standing on the dais, presides over the adoption of the document. Alexander Hamilton, seated at center, leans in to speak with Benjamin Franklin, who is holding a cane; on the other side of the table is James Madison, the primary author of the Constitution. Virginia delegates missing from the scene are Edmund Randolph and George Mason, each of whom refused to sign the document. Patrick Henry, who feared a strong federal government, refused even to attend the convention and was reputed to have said about the proceedings, "I smelt a rat." Though Thomas Jefferson, who was then serving as minister to France, did not attend the convention, his impact on the Constitution was nonetheless important. In acknowledgment of that fact, the artist borrowed from the Library of Congress some of Jefferson's original books and painted their likenesses next to Benjamin Franklin's chair.

In 1939, Congress commissioned the popular illustrator and artist Howard Chandler Christy to paint the scene; he was paid $30,000 for the twenty-by-thirty-foot framed oil on canvas. The painting, dedicated in May 1940, was eventually hung in the east stairway of the House wing of the United States Capitol. One of the best known paintings in the Capitol, it was attacked and slashed in 1967 and subsequently repaired and cleaned.