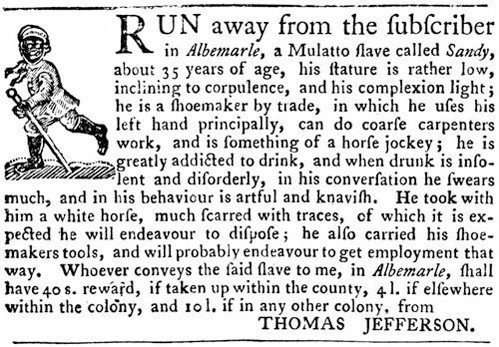 Thomas Jefferson advertises for the capture of a runaway slave in the September 14, 1769, edition of the Virginia Gazette. The enslaved mulatto, a light-skinned thirty-five-year-old shoemaker, is described as being "greatly addicted to drink," prone to using profanity, and "artful and knavish" in his behavior. In addition to his shoemaking skills, the runaway had some proficiency in carpentry and was "something of a horse jockey." Jefferson offered a bounty for the capture and return of the man.