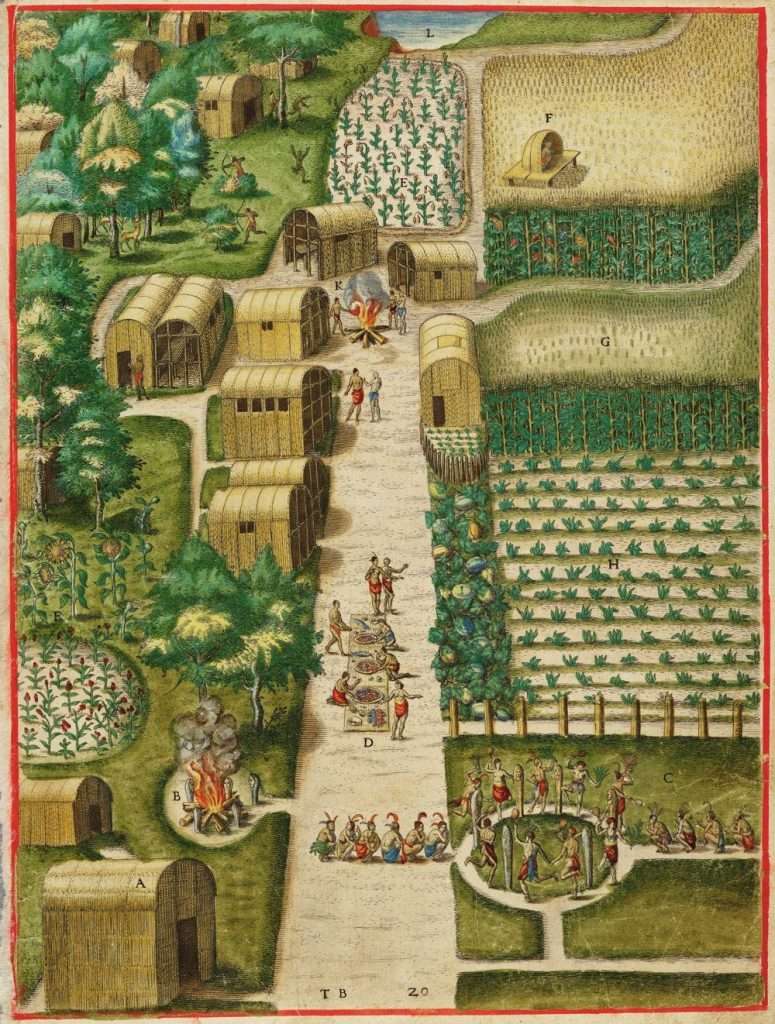 The Roanoke Indian town of Secotan is portrayed in this colored engraving by Theodor de Bry based on a watercolor painting by John White. Adding considerable detail to White's eyewitness sketch, de Bry shows village life as it was lived by the Algonquian-speaking Indians in the Outer Banks region of present-day North Carolina. These Indians are closely related in language and culture to the Indians of Tidewater Virginia, and White's paintings are an important source of historical and ethnographic information about both groups.

Unlike some Algonquian towns, Secotan is not enclosed by a palisade; rather, the dozen or so dwellings are scattered amidst fields and forest. Three fields of maize grow along the right side of the image, which White labeled in his original painting as "Corne newly sprong" (top), "Their greene corne" (center), and "Their rype corne" (bottom). In the first of these, a watchman in a raised hut wards off crows and other animals. De Bry added fields of tobacco (top center) and pumpkins (to the left of the ripe corn) based on descriptions by Thomas Hariot, who accompanied White and approximately 600 colonists to Roanoke in 1585. A group of about sixty Englishmen, led by their Indian guide Manteo, visited Secotan, located on the present-day Pamlico River, in mid-July. (White called the town "Secoton" and de Bry "Secota," but most historians have settled on "Secotan.")

On the main thoroughfare a feast has been set up; nearby, a ceremony is in progress. White's original painting noted the men "in their prayers with strange [g]estures and songs dancing abowt posts carved on the topps lyke mens faces." Although White was particularly adept at capturing these "strange [g]estures," de Bry has here transformed them into classical poses that would have been more familiar to European eyes. The building at the lower left, meanwhile, is a holy temple used to house priests, host various rituals, and store the riches and embalmed bodies of dead weroances, or chiefs. Above that is a circular, communal garden (added by de Bry); at the upper left, men hunt deer.