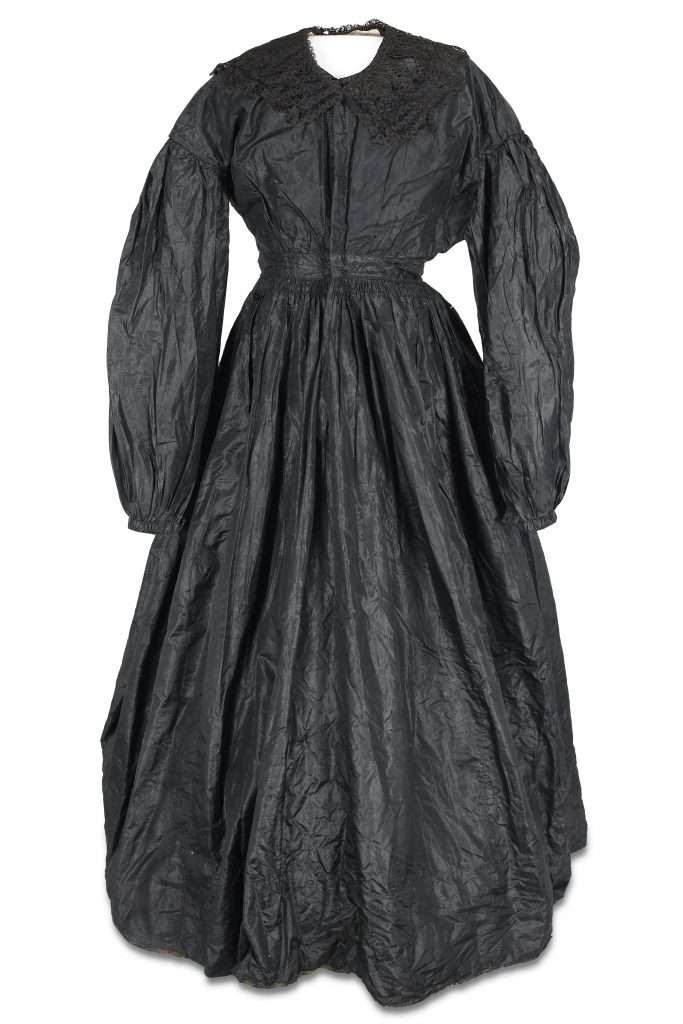 The following images portray mourning clothing in Virginia in the antebellum period—a time when elaborate and structured mourning customs prevailed. Etiquette books recommended that mothers mourn a child for one year. Widows, however, were expected to respect a minimum two and a half years in mourning. In the period immediately following the death of her husband, a wife embarked on heavy-mourning, in which she was compelled to wear only black clothing and to keep her face concealed with a black crepe veil when she left her home. This was followed by full-mourning, during which she continued to don black garments and a veil, but lighter shades of lace and cuffs were allowed to adorn her outfit. The final stage, half-mourning, permitted the widow to wear solid-colored fabrics of lavender, gray, and some purples.

The simple black silk mourning dress shown here has a detachable collar of black machine lace in a floral pattern. The dress dates to around 1860 and belonged to a Lizzie Smith from Matthews County, Virginia. Women were often photographed in mourning clothing, including these grieving women whose cased images are in the collection at the Valentine Richmond History Center. Elizabeth Ann Valentine's cheeks are gently hand-colored in a daguerreotype made around 1855; an unidentified woman wears a black veil, a light-colored collar, and earrings and necklace in the shape of a cross–and probably fashioned out of the hair of the deceased—in an ambrotype made in Richmond circa 1857; Marie Sanford Johnston, captured in a daguerreotype around 1860, is entirely clad in funereal tones, save for the light cap beneath her bonnet; and an unidentified women, circa 1855, sits for a daguerreotype in black lace gloves and partial hair covering.