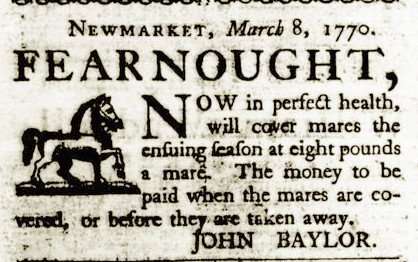 John Baylor advertises the breeding services of his prized imported stallion Fearnought ("now in perfect health") for the price of eight pounds a mare in the March 22, 1770, edition of the Virginia Gazette. In 1764, Baylor had purchased the thoroughbred for the unprecedented price of a thousand guineas and had brought it to his Virginia plantation Newmarket in what would become Caroline County. Fearnought became Virginia's premier breeding horse and, according to a leading nineteenth-century chronicler of race horses, did "more to improve the breed of thoroughbred race horses than any other stallion in the United States" at the time. Many of Virginia's gentry sent their mares to Baylor's plantation for stud services and then bragged for years about their horses' lineage. Thomas Jefferson, for example, proudly noted in his farm journal that his favorite mount, Caractacus, was the grandsire (grandson) of Fearnought.