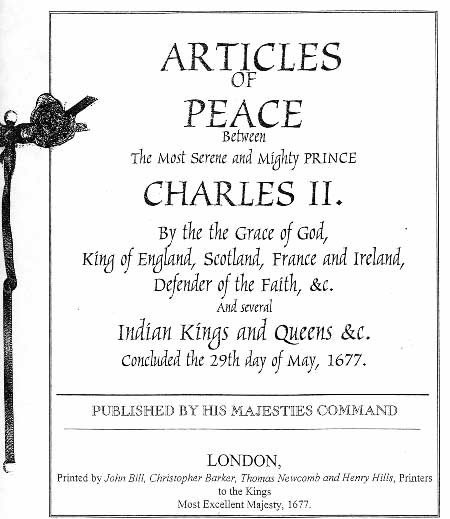 Signature marks made by the Virginia Indian leaders who signed the Treaty of Middle Plantation can be seen in this printed version of the treaty that was published in London in 1677 under the title ARTICLES OF PEACE Between the Most Serene and Mighty Prince CHARLES II. By the Grace of God, King of England, Scotland, France and Ireland, Defender of the Faith, &c. and several Indian Kings and Queens &c. Concluded the 29th day of May, 1677. The Indians swore loyalty to the British sovereign in return for being officially granted access to civil courts, as well as hunting rights and permanent ownership of land within a three-mile radius of their towns. In addition, the terms of the treaty reunited several Powhatan chiefdoms under the authority of the Pamunkey chief Cockacoeske, whose W-like signature mark is at upper left.