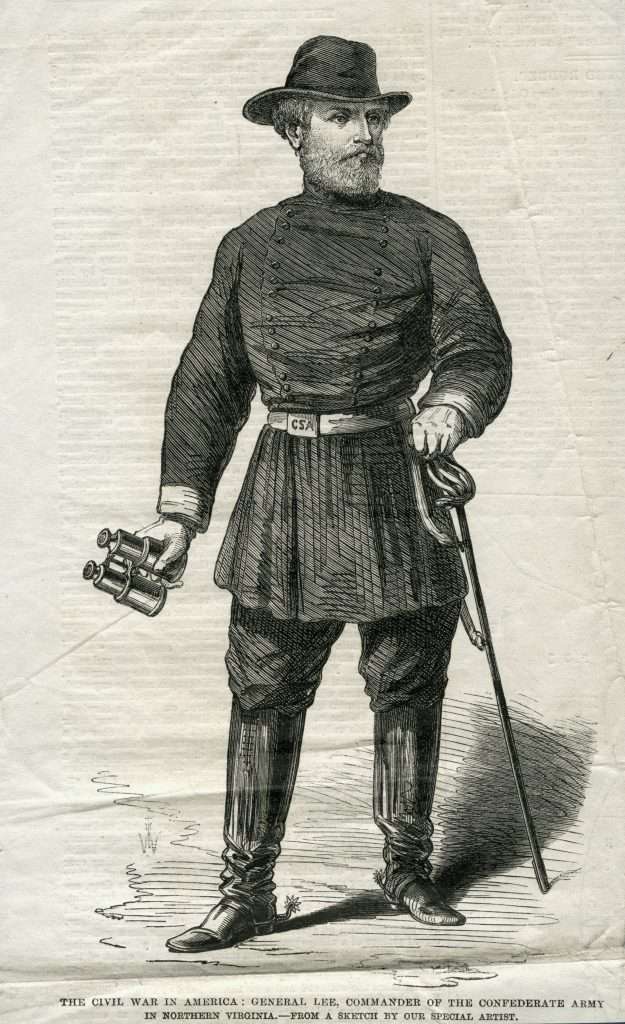 This engraving of Confederate general Robert E. Lee brandishing field glasses and leaning slightly on his sword was based on a drawing done in the field, probably late in 1862, and is the only drawing of Lee done from life. When it was printed in Harper's Weekly, the editors commented on how it "differs very materially from the portraits which are current at the North, which are taken from old photographs made before the war." For many in the North, this was their first glimpse of a gray–bearded wartime Lee, close to the image that later would become iconic.

The artist, Frank Vizetelly, was a correspondent for the Illustrated London News, where this engraving, along with another one of Thomas J. "Stonewall" Jackson, first appeared on February 14, 1863. The accompanying article describes Lee as "calm and stately, his presence impressive and imposing." His voice may have been "slightly monotonous," but it was more than made up for by his "unaffected childlike guilelessness" and his "simple ingenuous nature."

Despite this heroic image of Lee, it did not help the Confederacy's effort to win recognition from Great Britain and France, which by 1863 had stalled. King Cotton could be obtained from sources other than the American South, and absent a significant victory of the kind not achieved at Antietam (1862) and Gettysburg (1863), the Europeans preferred to remain neutral.

Vizetelly was an experienced war correspondent who had accompanied the Italian revolutionary Giuseppe Garibaldi on his 1860 campaign. (The London paper describes Lee as a "much handsomer" Garibaldi.) Arriving in the United States a year later, Vizetelly traveled first with the Union army, witnessing the debacle at First Manassas and then making his way west to the Mississippi. However, government restrictions on his movements disgusted him and he went south without even telling his employers, who were surprised by the new point of view of his next batch of sketches.

Vizetelly was the only artist–correspondent with the Confederate army and became attached to the Southerners. In a caption to a view of the Army of Northern Virginia's winter quarters in 1864, he wrote: "There curled the blue smoke from the tent of Robert E. Lee, whose hand I had just shaken and whose friendship I am proud to own." Vizetelly was probably killed in action while covering an anti–British revolt in the Sudan in 1883.