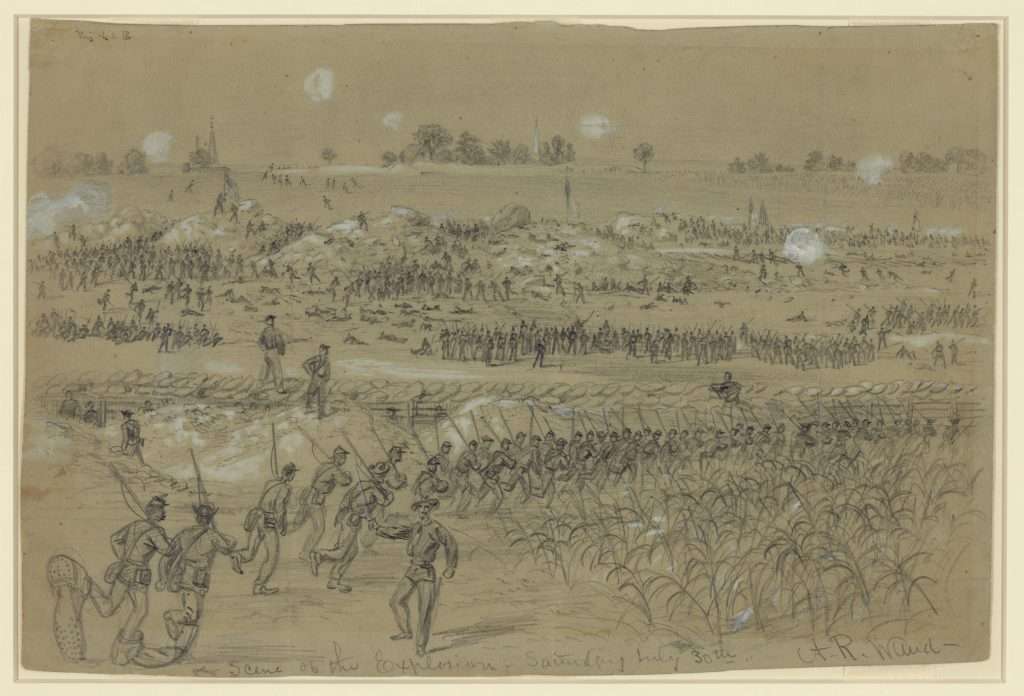 Battle of the Crater

An on-the-scene pencil sketch by Harper's Weekly artist Alfred R. Waud captures the fast-moving events taking place during the Battle of the Crater on July 30, 1864. A Union tunnel beneath Confederate defenses had been packed with explosives and detonated at 4:44 a.m., killing a great number of Confederate soldiers and opening up an enormous hole in the ground that has come to be known as the Crater. This sketch shows what was happening around 8 a.m. when Union troops were moving toward the site of the explosion in order to engage what was left of the Confederate troops. In the middle distance are mounds of earth thrown up by the blast; in the foreground are black and white Union soldiers heading toward the battle. The black soldier on the bottom left wears oversized brogan shoes, a detail that was not included in the final engraving of this scene that appeared in Harper's Weekly on August 27, 1864.

In the ensuing battle, Union troops became trapped inside the Crater; 3,800 of them were killed, wounded, or captured. Black troops were particular targets, and many who tried to surrender were "butchered in cold blood," according to a white Union officer. A Virginia sergeant later described the horrific aftermath of the Union surrender that day, when unarmed and, in some cases, wounded black soldiers were slaughtered. "The whole floor of the trench was strewn with the dead bodies of negroes, in some places in such numbers that it was difficult to make one's way along the trench without stepping on them."