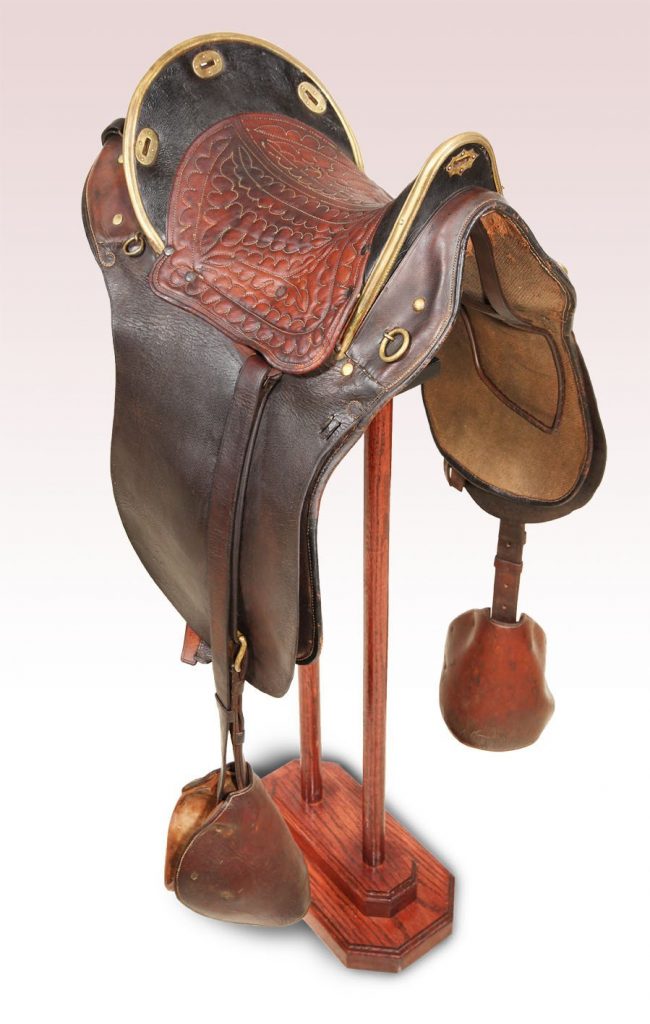 Robert E. Lee's well–preserved saddle features fancy oak leaf stitching on the seat and russet leather–hooded wooden stirrups. Lee used this saddle during the Civil War while atop his famous steed Traveller. The sight of General Lee on horseback during battle was an inspiring one for his troops. On several occasions during the Overland Campaign of 1864, Lee arrived unexpectedly at the front lines on Traveller and his mere presence helped turn the tide of battle. "Lee to the rear!" his devoted troops cried out, and then, after ensuring the safety of the general, they launched into combat with renewed fervor.

Robert E. L .ee's nephew, Fitzhugh Lee, donated this saddle, to Richmond's Museum of the Confederacy on the July 5, 1904. It is a modified form of the Grimsley saddle, which had been the regulation model for United States soldiers in the Mexican War and continued to be so until 1859 when the so–called McClellan saddle, based on then–Captain George B. McClellan's design, was adopted as the standard. Lee served on the U.S. Army board that conducted saddle trials during the redesign process, and his own saddle modifications may have been based on those tests.

A military saddle like this one with its built–up front and back (pommel and cantle) is different from a hunting or jumping saddle that allows the rider to move around more easily. The rich detailing and thick leather skirt of this particular saddle was much more elegant than the type generally used by enlisted men in the Confederate cavalry; because leather was hard to come by in the wartime South, saddle skirts were often made of painted canvas