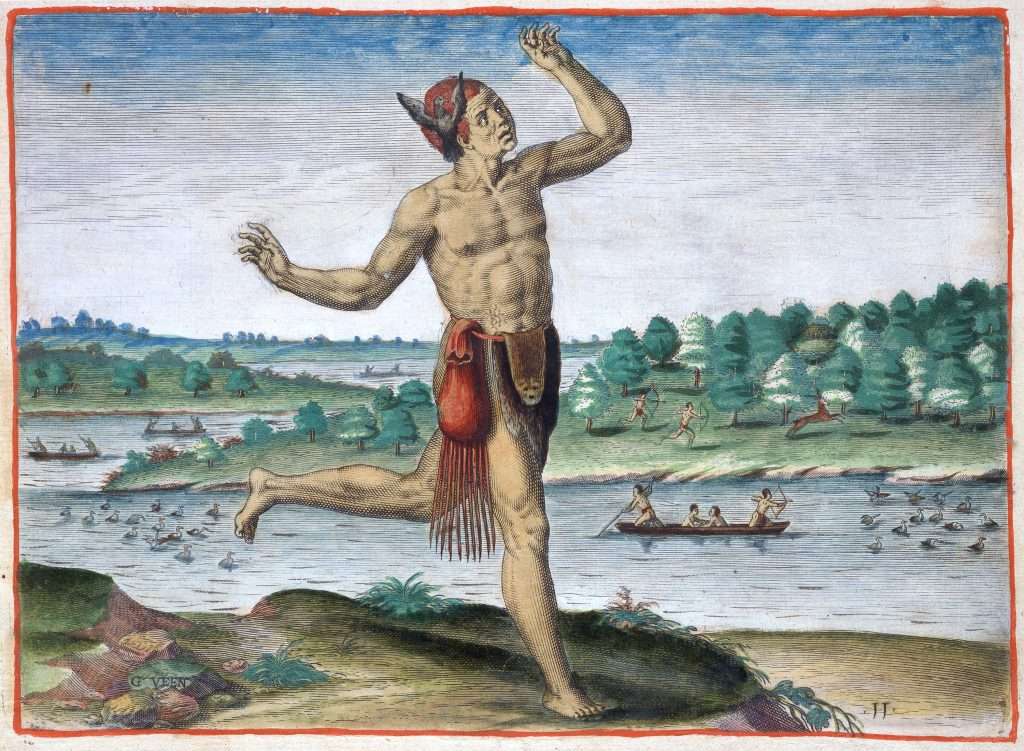 An Indian medicine man appears to be in the midst of a ritual dance in this engraving by Gysbrecht van Veen based on an earlier watercolor painting by John White. The image is one of a series that portrayed the lives of the Algonquian-speaking Indians in the Outer Banks region of present-day North Carolina. These Indians are closely related in language and culture to the Indians of Tidewater Virginia, and White's works, along with their related engravings, are important sources of historical and ethnographic information about both groups.

White's original painting, titled The flyer, portrays the figure against a blank background; Van Veen's later version, titled The Conjurer (or Præstigiator in this Latin edition), includes a busy background of Indians hunting and fishing. In both renditions the figure's pose mimics the classic representation of Hermes, the ancient messenger for the gods who also served as a guide to the Underworld. Van Veen's change of title and the embellishments he made to the image were based on written observations by Thomas Hariot, who accompanied White and approximately 600 colonists to Roanoke in 1585. Hariot wrote that conjurors were soothsayers, "For they be verye familiar with devils, of whome they enquier what their enemys doe, or other suche thinges." And he described their appearance as follows: "They shave all their heads saving their creste which they weare as other doe, and fasten a small black birde above one of their ears as a badge of their office. They weare nothinge but a skinne which hangeth down from their gyrdle …" A pouch also hangs from the conjuror's belt and it was probably filled with tobacco or other plants, herbs, or powders. Conjurors, who held special spiritual knowledge, served as healers.

Van Veen's engravings, along with those by Theodor de Bry, accompanied A briefe and true report of the new found land of Virginia, Hariot's description of his year at Roanoke, which was intended to serve, in part, as a justification for further colonizing efforts. These rare, hand-colored versions of the illustrations appeared in a 1590 edition published in Latin.