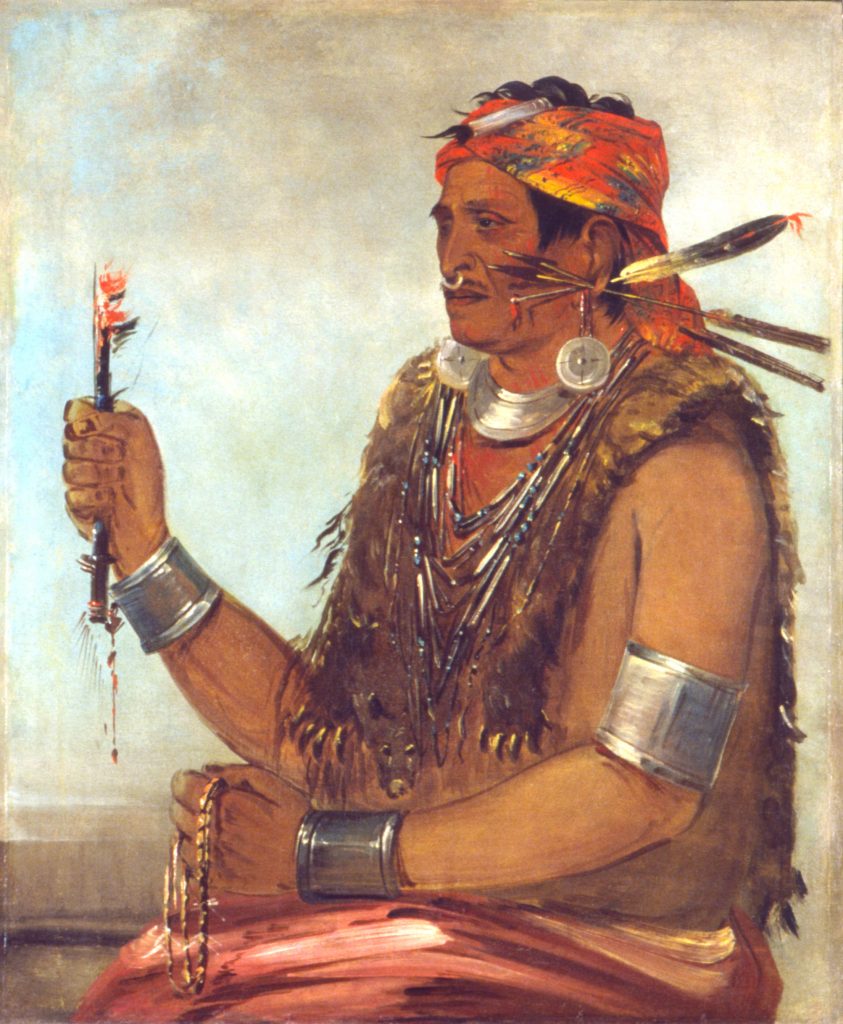 Ten-sqúat-a-way, The Open Door, Known as The Prophet, Brother of Tecumseh

This oil painting by George Catlin depicts the Shawnee religious leader Tenskwatawa (identified as Ten-sqúat-a-way by the artist), a powerful figure who, along with his brother, the Shawnee Chief Tecumseh, opposed the United States post-Revolutionary War claims to territory northwest of the Ohio River that was long-held by native peoples. Catlin wrote the following about the subject of his painting:

The ​"Shawnee Prophet," is perhaps one of the most remarkable men, who has flourished on these frontiers for some time past. This man is brother of the famous Tecumseh, and quite equal in his medicines or mysteries, to what his brother was in arms; he was blind in his left eye, and in his right hand he was holding his ​"medicine fire," and his ​"sacred string of beads" in the other. With these mysteries he made his way through most of the North Western tribes, enlisting warriors wherever he went, to assist Tecumseh in effecting his great scheme, of forming a confederacy of all the Indians on the frontier, to drive back the whites and defend the Indians’ rights; which he told them could never in any other way be protected … [he] had actually enlisted some eight or ten thousand, who were sworn to follow him home; and in a few days would have been on their way with him, had not a couple of his political enemies from his own tribe … defeated his plans, by pronouncing him an imposter.

By the time this portrait was painted in 1830, Tenskwatawa's dream of a confederacy—and of saving ancestral native lands—had long since been shattered. He was then living west of the Mississippi where Catlin painted him, probably at Fort Leavenworth in present-day Kansas. After observing the native leader, Catlin wrote of him: "This, no doubt, has been a very shrewd and influential man, but circumstances have destroyed him … and he now lives respected, but silent and melancholy in his tribe.”