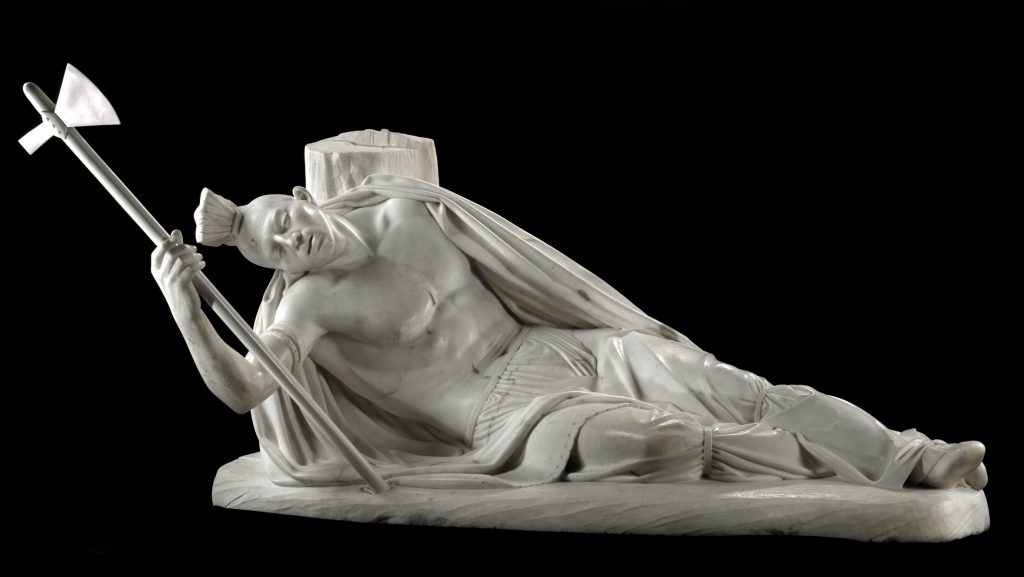 This marble sculpture depicts the Shawnee chief Tecumseh clutching his tomahawk as he lays dying after being shot in the right forehead during the Battle of the Thames on October 5, 1813. Tecumseh resisted United States expansion into native lands in the Ohio Valley after the Revolution and tried to build a coalition of indigenous nations to block further encroachment by white settlers. During the War of 1812, he allied his forces with the British and was killed during a battle at the Thames River in what is now the province of Ontario. William Henry Harrison, who led the American forces in that battle, recognized Tecumseh as a formidable foe, calling him, "one of those uncommon geniuses, which spring up occasionally to produce revolutions."

The gallery label from the Smithsonian American Art Museum, which owns the sculpture, describes the work as follows:

This sculpture emulates the ancient Roman sculpture the Dying Gaul, which similarly portrays a military adversary as heroic, yet exotic and powerless. A fictive portrait, it mythologizes Tecumseh as a timeless "noble savage," dangerously and erroneously suggesting that his death and the rapacious expansion of the United States were inevitable. The work stood in the U.S. Capitol from 1864 to 1878, a time when Congressional legislation profoundly impacted Indigenous sovereignties.