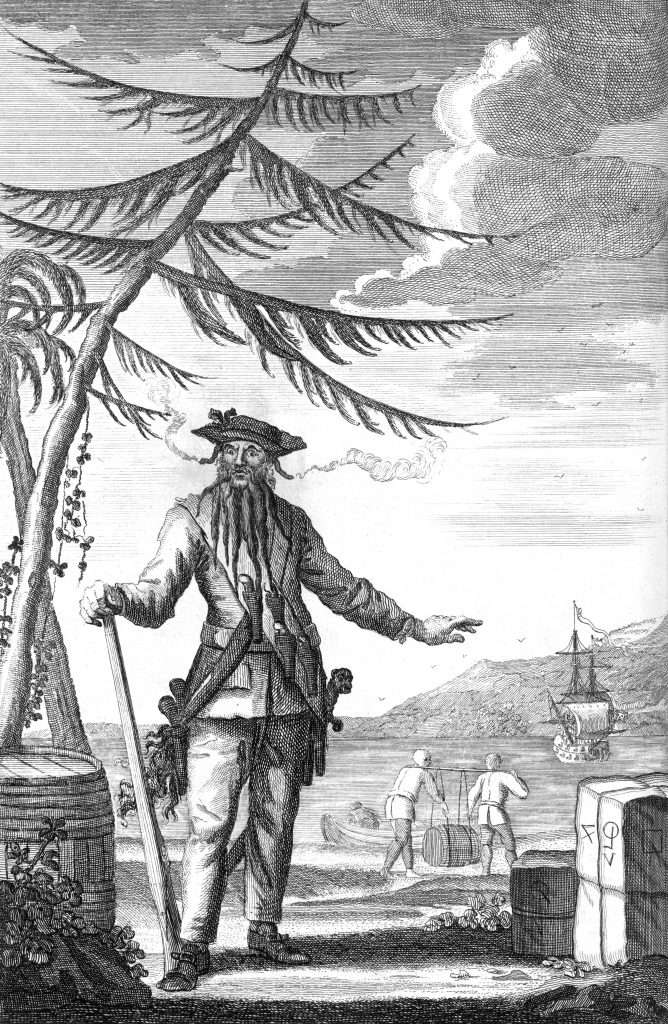 The notorious pirate Edward Teach, better known as Blackbeard, is shown heavily armed in this eighteenth-century engraving. In the 1724 edition of A General History of the Pyrates, From Their first Rise and Settlement in the Island of Providence, to the present Time, author Charles Johnson described how the pirate's alias came from his long beard, "which, like a frightful Meteor, covered his whole Face, and frightened America more than any Comet." He was particularly fierce-looking during battle: "In Time of Action, he wore a Sling over his Shoulders, with three brace of Pistols, hanging in Holsters like Bandaliers [sic ]; and struck lighted Matches under his Hat, which appearing on each side of his Face, his eyes looking naturally fierce and wild, made him altogether such a Figure, that Imagination cannot form an Idea of a Fury, from Hell, to look more frightful."

Blackbeard wreaked such havoc on colonial trade that in 1718 the lieutenant governor of Virginia, Alexander Spotswood, dispatched a force led by Robert Maynard to kill the pirate near Ocracoke, on the Outer Banks of present day North Carolina. According to Johnson's text, a fierce battle ensued "till the Sea was tinctur'd with Blood round the Vessel … " Blackbeard was killed, and "his Destruction, which was of such Consequence to the Plantations, was entirely owing to the Conduct and Bravery of Lieutenant Maynard and his men … " The victorious Maynard had Blackheard's head cut off and hung from a spar over the prow of his ship for the trip back to Virginia.