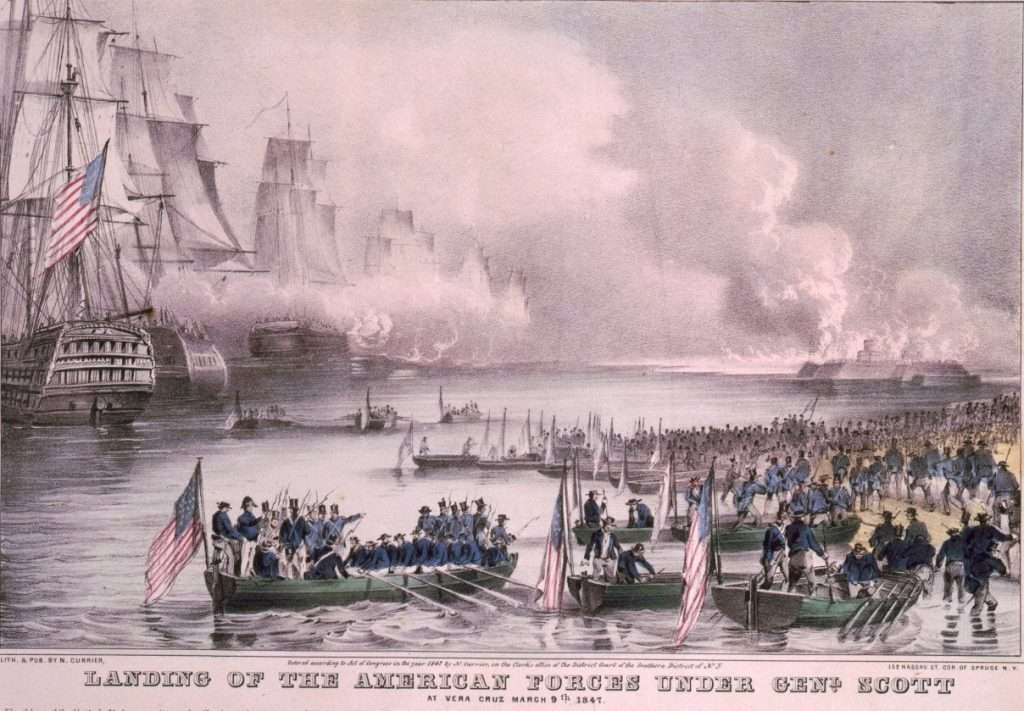 Rowed ashore by sailors wearing broad–brimmed hats, General Winfield Scott's troops begin their landing at Vera Cruz in 1847 during the Mexican War. Ships support the landing with cannon fire directed against Mexican defenses and, as the caption at the bottom of this Currier and Ives print notes, "the whole army reached the shore in fine style with–out accident or loss." Scott had determined to land at Vera Cruz and then push inland along the National Road, in a campaign reminiscent of Spanish conquistador Hernando Cortes's route to Tenochtitlan (now Mexico City). After Scott decided that a naval bombardment alone would not pound the Mexican city into submission, he designed an amphibious landing craft and ordered his troops to go ashore on March 9, 1847. This landing was one of the earliest amphibious operations and the largest the United States would conduct until World War II.

As Scott's men landed, they began to establish artillery emplacements, bringing large naval tubes ashore to batter the Mexican fortifications. A talented young engineer on Scott's staff, Captain Robert E. Lee, helped position the naval gun emplacements and directed their construction. Gunners from the navy manned the batteries, including Lee's brother Sydney Smith Lee. On March 22, the batteries opened fire. Robert worried about his brother, later writing his wife that "I stood by his gun whenever I was not wanted elsewhere. Oh! I felt awfully, and am at a loss what I should have done had he been cut down before me." By March 29, the city was in American hands and Scott began his advance inland.

Lee completed his tasks well at Vera Cruz and Scott relied upon him heavily in the subsequent campaign, using him to scout out the Mexican topography for the American advance. Despite receiving brevet promotions for his performance at the Battle of Cerro Gordo (April 1847), some historians, including Douglas Southall Freeman, conclude that Lee's crowning achievement in the Mexican War was a multi–day scouting trip across a treacherous dried lava field called the Pedregal; his reconnaissance work helped Scott attain victory at the Battle of Contreras (August 19, 1847). Scott later remarked that Lee's mission there had been "the greatest feat of physical and moral courage performed by any individual" during the campaign.