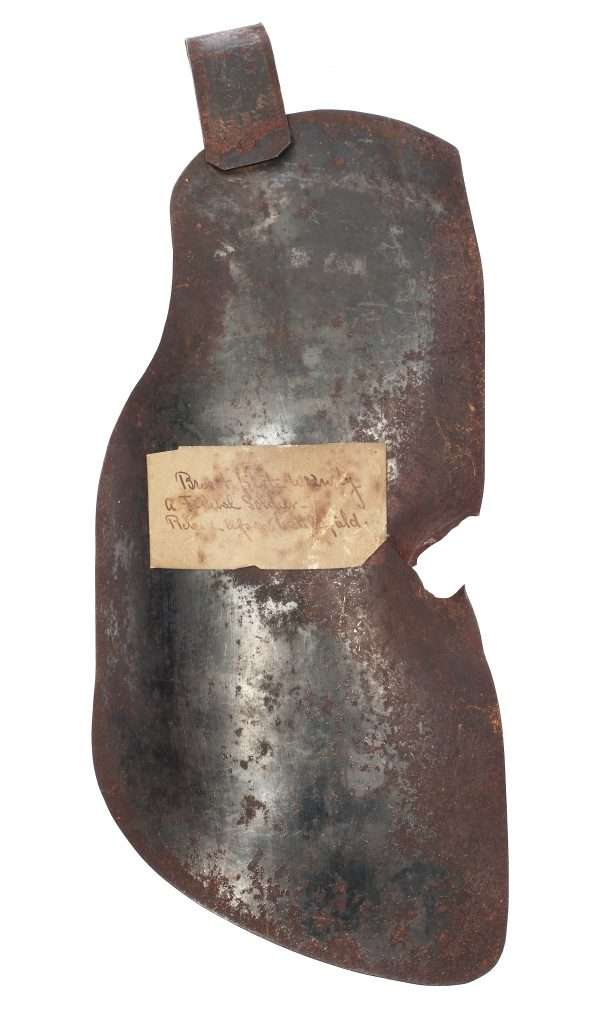 The missing section on the right side of this sheet-iron breastplate shows the deadly effect of an artillery shell. The body armor was pierced by a piece of shrapnel—and the Union soldier wearing it probably killed—during the battle of Malvern Hill on July 1, 1862. At sunrise the following morning this torn breastplate was found on the battlefield.

Confederate soldiers rarely, if ever, wore protective breastplates, but their Union counterparts sometimes did. Though not official military issue, bulletproof vests and breastplates were purchased by individual soldiers from peddlers who traveled from camp to camp in northern Virginia selling various types of armor. They could also be ordered by mail, and a Harper's Weekly advertisement for "The Soldiers' Bullet Proof Vest" made some bold claims: "Has been repeatedly and thoroughly tested with Pistol Bullets at 10 paces, Rifle Bullets at 40 rods, by many Army Officers, and is approved and worn by them. It is simple, light, and is a true economy of life—it will save thousands."

In reality, sheet-iron breastplates, like the one shown here, and "The Soldiers' Bullet Proof Vest," which was made of cast iron, proved of little value in battle as they were heavy, awkward, and largely ineffective. Those who wore them were also subject to ridicule by their unprotected comrades. But soldiers found other uses for these sturdy plates—as shovels or frying pans.