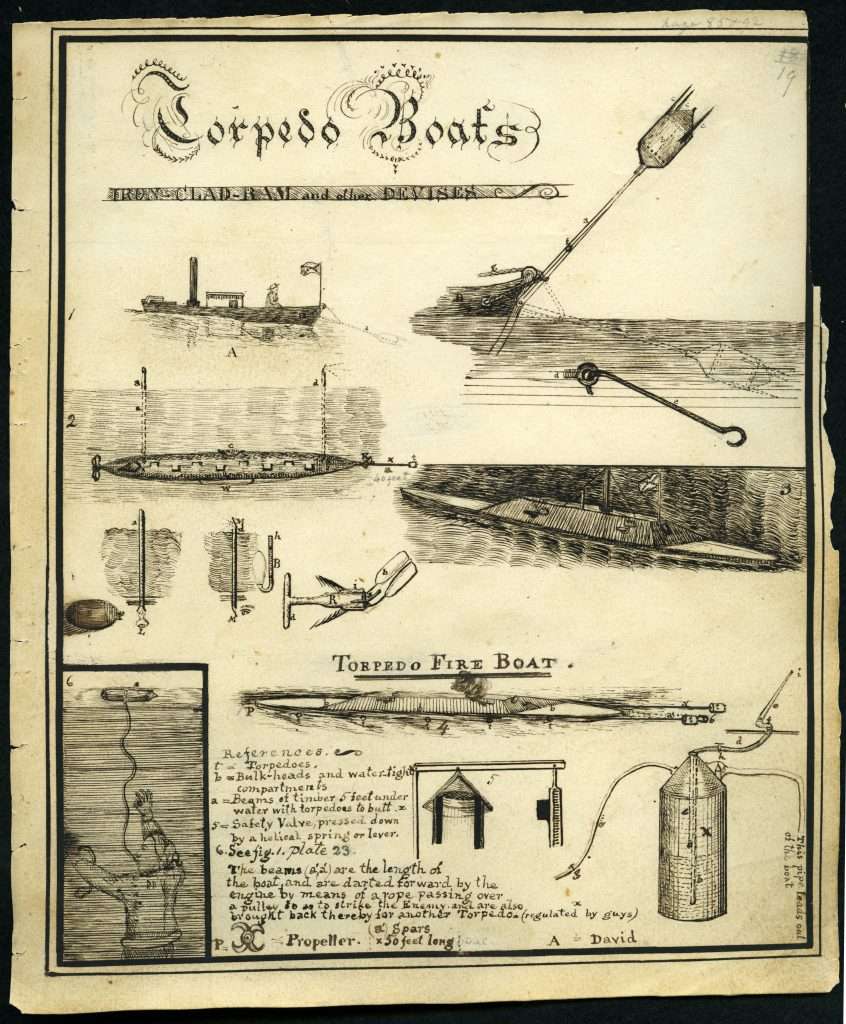 This drawing by Brigadier General Gabriel J. Rains, chief of the Confederate army's Torpedo Bureau, illustrates the torpedo technology available to the James River Squadron and the rest of the Confederate navy. Torpedoes of that era were not self-propelled, but had to be rammed into an enemy vessel. They were detonated by electrical current running through a wire insulated with gutta-percha (a natural waterproof latex), or by a cord activating an explosive primer. After a spiked torpedo at the end of a long spar, such as the one in the image at top right, had been rammed into an enemy ship, the torpedo boat would withdraw and detonate the device from a safe distance. Torpedoes were also left floating in the water in the manner of modern mines.

Rains's page diagramming "Torpedo Boats Iron-Clad Ram and other Devises," was part of a book that he complied during and after the war as a visual and written guide to Confederate torpedo technology. Rains wrote that "at Charleston, Mobile, and Richmond, a number of small boats from 25 to 30 feet long, made of boiler iron plates with a locomotive engine which operated a propeller at the stern as the motive, were made and called 'Torpedo–Boats' (fig A plate) or 'Davids.'"

At its peak, the James River Squadron consisted of three steam-powered ironclad warships and more than a half-dozen small gunboats, converted civilian vessels, and torpedo boats. Torpedoes turned out to be a more effective and cost-effective deterrent than the expensive ironclads, which proved to be unwieldy in the James River. "Iron-clads are said to master the world," Rains wrote, "but torpedoes master the iron-clads."