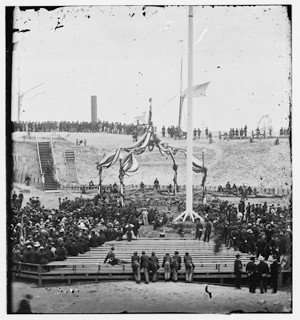 Civilians and soldiers, a few of whom, in the foreground, hold musical instruments, await the arrival of Union general Robert Anderson and guests on April 14, 1865, for a victorious ceremony to raise the American flag on the parade ground at Fort Sumter in Charleston Harbor. Four years earlier, then–Major Anderson, who was in command of the fort, surrendered to Confederate forces in the wake of a bombardment which turned out to be the opening salvo of the Civil War. At that time, Anderson lowered the thirty-three-star American flag and took it with him to New York City, where he took part in an enormous patriotic rally in Union Square. A week after Confederate general Robert E. Lee's surrendered at Appomattox in 1865, Anderson returned to a battered, but reclaimed, Fort Sumter to raise the American flag he had removed at the outbreak of the war. (That evening, U.S. president Abraham Lincoln would be assassinated in Washington, D.C.) General Winfield Scott had posted Anderson to Charleston Harbor, South Carolina, during the secession crisis in 1860. He chose Anderson—who was a slaveholding Kentuckian, an ardent Unionist, and a Scott protégé—in an effort to chart a moderate course. Scott also opposed the relief mission President Lincoln sent to the garrison at Fort Sumter when it came under siege, as he believed it might provoke war. Scott's pragmatic and moderate approach prompted many Northerners to vilify him and suspect that, with his Virginia roots, he might be a crypto-secessionist. Instead, when the conflict began Scott remained loyal to the Union cause and turned his formidable intellect into drawing up war plans.