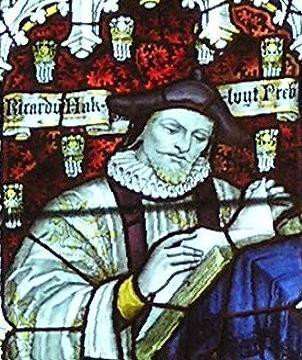 Richard Hakluyt (the younger) is shown studying a book in this 1905 stained glass window at Bristol Cathedral in England. A writer, Hakluyt was most famous for his works that promoted settlement in North America. A sponsor of the earlier failed colony at Roanoke, Hakluyt helped convince King James I to charter the Virginia Company of London in April 1606. The charter granted Hakluyt and "divers others" the right "to make habitacion plantacion and to deduce a Colonie of sondrie of our people into that parte of America commonly called Virginia."